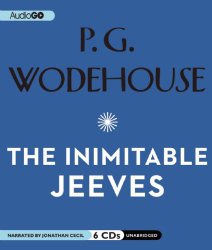 Since I was having such fun listening to Jeeves and Wooster stories, and since the library seems to have new copies of several of the books, I decided to try to listen to them more or less in order. NoveList tells me that The Inimitable Jeeves is the third book, coming after The Man with Two Left Feet, and Other Stories, which only has one Jeeves and Wooster story, and My Man Jeeves, which the library only has in a print edition.

I do know I’ve read The Inimitable Jeeves before, sometime or other, and the events related here were also reproduced in the brilliant BBC miniseries which I have on DVD. But that didn’t keep me from enjoying Jonathan Cecil’s performance tremendously. And I enjoyed the characters and situations all the more, because I know how they will continue to haunt Bertie’s life.

Indeed, this is the volume where Bertie first gets engaged to Honoria Glossop. It happens because, while having a disagreement with Jeeves, Bertie thought he could get his pal Bingo Little (who was then in love with Honoria) out of a scrape using his own brain power. How foolish, Bertie! I found myself trying to warn him the whole time, and shaking my head with great delight as his scheme went wrong.

Of course, Jonathan Cecil adds so much. This one involves several romantic trials which only Jeeves can solve, including one involving Jeeves himself (which I hadn’t remembered). I listened to this while driving my son back to Williamsburg after Spring Break, and there’s nothing better at making the road seem short than hearty laughter, don’t you know.

Find this review on Sonderbooks at: www.sonderbooks.com/Fiction/inimitable_jeeves.html