Today I’m excited to host my second-ever Blog Tour Author Interview with Diane Zahler, author of A True Princess. You’ll find my review of the book just below in the previous post on this blog.

I found Diane’s answers to my questions intriguing. I hope you enjoy them!

I’ve always loved fairy-tale retellings, and can think of several that I love, such as The Goose Girl, by Shannon Hale, Beauty, by Robin McKinley, and Ella Enchanted, by Gail Carson Levine. What are some of your favorite retellings? Would you say those influenced your own writing?

I love Beauty and The Goose Girl too – in fact, those are my absolute favorite retellings. The way Robin McKinley and Shannon Hale filled out their stories and grace with which they write were a real inspiration to me. I also love East by Edith Pattou, a retelling of “East of the Sun, West of the Moon,” and Ash by Malinda Lo, a retelling of “Cinderella.” As these writers did, I wanted to create a complete world in my retellings, with intriguing characters and settings and a sense of magic.

Which were some of your favorite fairy tales as a child?

I read all the Andrew Lang fairy tale books – The Red Fairy Tale Book, The Blue Fairy Tale Book, yellow, green – if there’d been a puce one or a vermillion, I’d have read those too! I was especially taken with “The Twelve Dancing Princesses,” which I used as the basis of my first book, The Thirteenth Princess. And I loved “Rapunzel.” But I didn’t notice, at that age, that the princesses in these stories were not in control of their own fates – they were manipulated by magic, and later, generally, saved by a prince. I like a princess who can call the shots! And if there had been princesses like that when I was a kid, I think I would have loved them.

Can you put your finger on some reasons why you love fairy tales? (I’m not sure I could!)

Fairy tales treat both our earliest fears and our deepest hopes. The fact that similar tales are found in cultures around the world and have been popular for centuries indicates that the themes they treat resonate with us on a deep level. Many of them deal with abandonment, the death of a parent, and other situations that seem hopeless and out of the characters’ control. And yet often good vanquishes evil, and there’s a happily-ever-after. The idea that we – identifying with the characters in the stories – can face our fears and overcome them is empowering.

I actually very recently finished revising a middle-grade fairy-tale-type novel of my own, and have begun sending queries to agents. Do you have an agent? Any tips about getting published? Did you find any resistance to such traditional fantasy, with so many vampire and werewolves out there?

I don’t have an agent. I’ve had agents in the past, and they were not particularly helpful. Of course, the books I was sending out at the time weren’t particularly publishable, so that might have been the problem! But I had worked in children’s book publishing years ago and still knew some people, so I was able to get my work read. And I found that the fact that my books were fantasy in a more traditional vein was an relief to my editors. I get the impression from agents and editors I know that fairy tales are more likely to endure than the trendy vampire/werewolf/angel-fallen-to-earth fiction that’s so popular at the moment. As for tips – endurance. Resilience. A thick skin. Never give up! It took me decades to get here, but it took me much of that time to learn how to write.

I think of A True Princess as a wholesome story, suitable for young girls beginning on chapter books who love fairy tales, but also offering plenty to enjoy for older people like me. The main character encounters many good people who care about her, and it’s a feel-good story, even with the moments of danger. I wish that saying that didn’t make the book sound boring, because it’s not! Would you care to comment about that and about the age level of your imagined reader?

A True Princess, like The Thirteenth Princess, is marketed for the middle-grade, or tween, reader. That’s between 8 and 12 years old, though I’ve heard from many girls of 13-16 who really enjoyed The Thirteenth Princess. I did keep my readers in mind to some extent as I wrote, but the fact that my protagonist in both my novels is 12 keeps certain topics naturally off-limits. Lots of fairy tales in their original form are the opposite of wholesome – they feature murder, betrayal, abuse, every horror you can imagine, and some that are beyond imagining. Needless to say, I haven’t included most of those details in my retellings. My aim is not wholesomeness, or creating a feel-good story. Instead, my intention is to take the elements of the original story that I think would resonate with readers – the struggle between good and evil, the search for identity, the tension between fear and courage –and use those to craft a story that contains both aspects of the original and themes that work for today’s readers.

Thank you so much for sharing your thoughts with my readers and me! 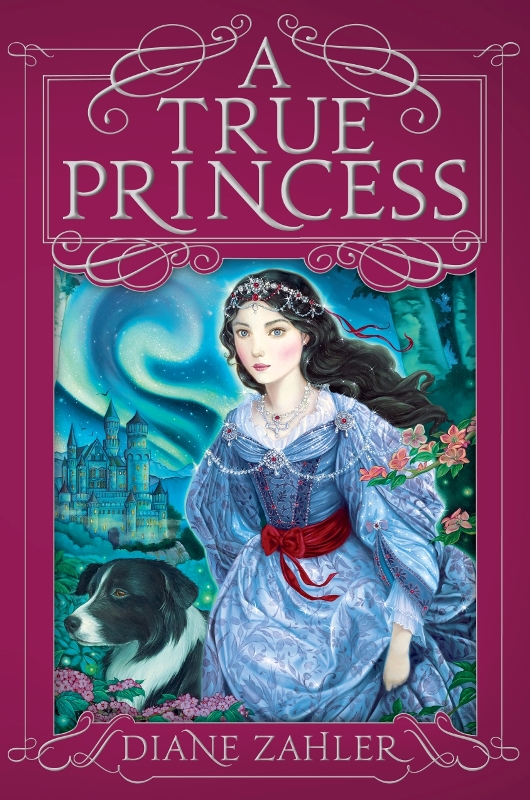 Some more about Diane Zahler and A True Princess:

About Diane Zahler
Diane Zahler, author of A True Princess, has loved tales of fairies and magic since before she was old enough to read. She has worked in the children’s room at a public library, in children’s book publishing, and as an elementary and high school textbook writer. The Thirteenth Princess, her first novel for young readers, was published in 2010. She lives with her husband and dog in an old farmhouse in the Harlem Valley that is held together with duct tape and magic spells. Diane’s website is: www.dianezahler.com.

About A True Princess
Twelve-year-old Lilia is not a very good servant. She daydreams, she breaks dishes, and her cooking is awful! Still, she hardly deserves to be sold off to the mean-spirited miller and his family. Lilia refuses to accept that dreadful fate, and with her best friend Kai and his sister Karina beside her, she heads north to find the family she’s never known. But danger awaits. . . .

As their quest leads the threesome through the mysterious and sinister Bitra Forest, they suddenly realize they are lost in the elves’ domain. To Lilia’s horror, Kai falls under an enchantment cast by the Elf-King’s beautiful daughter. The only way for Lilia to break the spell and save Kai is to find a jewel of ancient power that lies somewhere in the North Kingdoms. Yet the jewel will not be easy to find. The castle where it is hidden has been overrun with princess hopefuls trying to pass a magical test that will determine the prince’s new bride. Lilia has only a few days to search every inch of the castle and find the jewel—or Kai will be lost to her forever.

Here’s a link to order this book from Amazon.com

Here’s the complete list of blog sites on the tour: