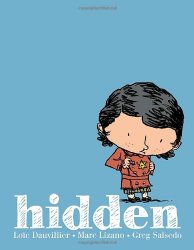 A Child’s Story of the Holocaust

I’m going to tell the ending in my review, so you know where the story goes and can judge if your child is ready for it. The pictures in the graphic novel format add to the power. And the frame of the grandmother telling the story lets you know right away that she will survive.

Dounia lived in Paris during the occupation by the Germans. At first, when her family is forced to wear the yellow stars, her father tells her they have all become sheriffs. She wears the star proudly, but quickly learns the truth when she is ostracized in school and told to sit at the back of the classroom.

Eventually, when the Nazis come for her family, Dounia is hidden under the false floor of a wardrobe. Their downstairs neighbors take her in after her parents have been taken away. But eventually, she must leave Paris. However, a woman sees Dounia and starts shouting for the police, so the father runs, and the mother must go with Dounia into hiding on a farm in the countryside.

Dounia, who now is called Simone, does make it through the war, because of the help of the people who hide her. After the war, they find her mother, looking gaunt and skeletal. They never do find her father.

And this is the story the grandmother tells her granddaughter in the night. The next day we learn that her son – the granddaughter’s father – has never heard the story. But he’s proud and happy that his daughter knows. And they end with a group hug.

It’s hard not to be moved by this story. It’s told from the perspective of a little girl who didn’t know what was going on. There’s not a lot of commentary, but the reader can easily see that the situation is not fair.

There’s one interruption in the story, flashing back to the grandmother and granddaughter, after people are first mean to Dounia at school.

Your daddy was a liar!
No, of course not!
Then why did he tell you you were a sheriff?
My daddy didn’t want to hurt me. He made up that story to protect me.
Okay, but then, why were they mean to you at school? They really didn’t like Jews?
I don’t know . . . I don’t think so. I think they didn’t know what to do. We were just children.
And the teacher? She was a grown-up!
Sometimes we do things without thinking, too.
Well, she was wrong.
Yes, I think you’re right.

I like that simple evaluation of the situation. There’s a lot more that can be said, but this sums it up nicely.

Find this review on Sonderbooks at: www.sonderbooks.com/Childrens_Fiction/hidden.html