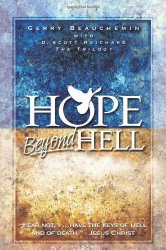 The Righteous Purpose of God’s Judgment

Years ago, through reading the books of George MacDonald, and through reading the Bible trying to put aside my preconceived notions, I came to believe that the Bible actually teaches that hell is not forever — that it has a redemptive purpose and will eventually be emptied out and every knee will bow to our loving Father. George MacDonald, however, while implying that this is what the Bible teaches, doesn’t lay out an argument of why he believes the Bible teaches this. Gerry Beauchemin, in this book, lays out an excellent argument.

Gerry Beauchemin calls his view “The Blessed Hope.” I like that very much, and much better than “Universalism,” because I think it’s different than what most people think of when they hear “Universalism.” Yes, I believe in hell. But I believe it represents the lengths to which a loving Father will go to bring his children back to Himself. It is not purposeless, everlasting torment.

Now, many Christians will automatically be arguing, “But that’s what the Bible says?” Is it really? I suggest you read this book and rethink that view. And I agree with the author that The Blessed Hope honors the character of God.

God is good even in His judgments. They are not infinite and horrendously cruel, but just, righteous, and remedial.

Many people don’t realize that the view that hell is eternal is not the one the church fathers held. I certainly didn’t realize that. Although this view is common today, it actually originated with Augustine, and so is called the Augustinian tradition here.

First, the author presents the pillars of his argument. The first pillar is the meaning of the Greek word Aion, which is more consistently translated “age” than “eternal.” Interestingly, Augustine, who supported the “eternal” interpretation (which is not consistent with other usage), was one of the first church leaders who wasn’t a native Greek speaker.

Then he talks about Gehenna, the lake of fire, which is every time spoken of as something finite, like prison. Also the word for “destruction,” apollumi is shown to mean “set aside,” “bring to nothing,” not “annihilate.” The author says, “Popular theology claims God is able to do all things except restore the destroyed for whom Christ died. Really?”

He also looks at God’s will and man’s free will. “God ‘will’ have all men to be saved. Does this mean God purposes with intent to accomplish His will, or that He merely desires it with no power to make it happen?”

He sums up the chapter on “Pillars” with this paragraph:

In this chapter, we have examined the foundational pillars upon which belief in infinite punishment is based and found them wanting. How many Christians including pastors and theologians have critically examined these pillars in light of the evidence presented here? I would venture to say very few. Given this evidence, let us explore with a fresh and open mind, unshackled by a flawed system and study the following chapters in sincerity and truth. Is there hope beyond Gehenna and the lake of fire? Might these judgments also have a positive purpose in God’s unfailing plan for man? The answer lies in the very nature of God Himself. Would a truly all-powerful and all-loving Creator bring into existence billions of people knowing well they would suffer for eternity as a result? Would He really pay such a price to get a few to love Him forever? This is what our tradition has taught. Is it true?

I do believe that Gerry Beauchemin goes on to present a wonderfully logical and complete argument for The Blessed Hope. Honestly, his words fill me with joy and love for my loving Father, who is Good, not vindictive and harsh and cruel. I am so glad that the people around me who don’t see things exactly my way will not be suffering in hell for all eternity — even the ones who make some bad choices in this life! (And don’t get me wrong — I wish they’d spare themselves a lot of suffering on that path to Life! But I really do believe God knows what each one needs.)

I’m not going to present all his arguments. Because I’d like people to consider them in full. I will, however, quote some paragraphs that I underlined in my slow savoring of the book.

This is from a chapter on God’s nature:

The longsuffering of our Lord “is” salvation. What a thought! When does the longsuffering of our heavenly Father for His children ever end? Does it end sooner than yours toward your children? The love of God expressed in His longsuffering will do what His brute power could never do — win the hearts of His enemies (Ps. 66:3-4) and make them His friends (Jer. 31:34; Jn. 15:15; Ro. 5:10).

Another interesting paragraph comes after quoting Christ telling his disciples to pray that God would send out laborers into His harvest (Mt. 9:36-38):

Why are we asked to pray for laborers for the harvest? Why are they needed? Doesn’t the text say it is because people are weary, scattered, distressed, and dispirited? But what has our tradition led us to believe? Answer: To pray because all people are on their way to hell! Isn’t there an inconsistency here?

And here is the introductory paragraph to the chapter called “Purpose-Driven Judgment”:

Is there any positive purpose to God’s Gehenna judgment? What purpose does it serve? According to the prevalent theology, its only purpose is to inflict pain. It refuses to acknowledge it has any remedial effect, and presents it merely as a perpetual prison from which its victims can never escape. I intend to show in this chapter the following facts: First, this view is simply unjust, and Scripture does not support unjust punishment of any kind. Second, Scripture affirms death is no obstacle to God in accomplishing His purposes in any life. Third, God is just and His justice satisfies even our God given human understanding of justice. Fourth, the Bible provides clear examples that all His judgments are driven by a positive purpose.

This paragraph echoed my own experiences when I read the Bible after becoming convinced that George MacDonald (who studied Greek) believed the Bible did not teach that hell lasts forever:

Most of us are not aware of how powerfully our paradigms affect how we understand the Scriptures. They force us to conclude certain passages do not mean what they say. Unless we are keenly aware of this, and make a diligent effort to compare Scripture with Scripture, we cannot see truth staring us in the face. It has been a slow, hard process for me. But once I stepped out of the eternal hell paradigm and began seeing Scripture without that filter, I was freed to receive God’s revelation in a fresh new way.

He looks at proclamations from Scripture, the Apostles, church fathers, logic, the character of God, and consequences. Is Christ really the Savior of the World?

Scripture refers to Christ as the Savior of the World. In fact, “Jesus” means savior (Mt. 1:21). The Father sent Him as such (1Jn. 4:14). Though popular theology gives lip service to this title, it actually denies it. It attests instead that Christ is merely the Savior of “some out” of the world. Or again, He is the “wish to be” Savior of the world. If the mass of humanity is lost forever, call Him what you will, He is not the Savior of the world. It does not matter that few, many, or most of the world is saved. Even if none are saved, He would still be referred to as “Savior of the world.” For the reasoning is simple: to offer salvation, makes a savior. That is strange indeed — “The Savior of the world not saved.” What would you think of a lifeguard who was hailed as the hero of the day at the funeral of a young child for merely having offered her a life preserver and then threw it to the other end of the pool?

The Blessed Hope and the Augustinian Tradition present two opposing views of God. Of these two ancient theologies, only the first does justice to the character of our glorious God as He is revealed in Christ. It is what the prophets, the apostles, and the early Church embraced. The second, on the other hand, is shackled by a theology of terror which I contend is the primary reason the Gospel has not yet taken the world by storm. Is it by coincidence that once it dominated the western church the medieval world plunged into the “dark ages”?

I am by no means presenting all the arguments here. If this interests you at all, I strongly recommend this book. As for me? Reading this book filled me with joyful, blessed hope.

Find this review on Sonderbooks at: www.sonderbooks.com/Nonfiction/hope_beyond_hell.html