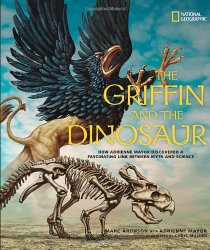 The Griffin and the Dinosaur

How Adrienne Mayor Discovered a Fascinating Link Between Myth and Science

by Marc Aronson with Adrienne Mayor
illustrated by Chris Muller

Here’s a picture book biography of a scientist readers probably haven’t heard of, but whose work, which continues to the present day, is fascinating.

Adrienne grew up interested in the natural world around her and also interested in Greek myths. As she studied Greek writings and Greek art over a course of years, she became convinced that the Greeks were basing their stories on things they had actually seen.

Adrienne’s decade-long quest to prove that the griffin legend was based on a real fossil always had a larger aim. She was certain that the peoples of the ancient world had been as attentive to fossils and bones as we are today. If the Cyclops was an extinct mammoth and the griffin was a Protoceratops, surely many other myths and legends were based on observation, not fantasy. Which ones?

This book is an introduction to the topic that is sure to pull in readers. We’ve got Greek mythology and dinosaurs, combined. What could possibly have more kid appeal?

Find this review on Sonderbooks at: www.sonderbooks.com/Childrens_Nonfiction/griffin_and_the_dinosaur.html