It’s time for Sonderling Sunday! That time of the week when I play with language by looking at the German translation of children’s books. And look what I found at Powell’s books in Portland! A copy of Der Lorax! 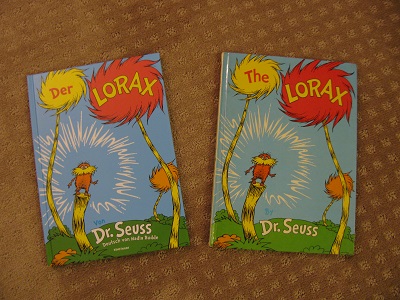 It’s been many weeks since I last did Sonderling Sunday. No, I’m not going to let it fall by the wayside. But I’ve had a busy summer, including a wonderful vacation in Oregon. And I haven’t posted on my website much lately, because this week my computer broke. But I’ve managed to restore the operating system, and I’m hoping to spend my Labor Day restoring files. And fortunately, I can post Sonderling Sunday without having my files back. While I was in Oregon, I visited my oldest son Josh, and we went to Powell’s Books in Portland. I had no idea they had a small German section — and I found Der Lorax.

Later, my younger son Tim and I had a marvelous time taking turns reading pages of the whole thing aloud. He reflected that it’s probably not as hard as you might think to translate Dr. Seuss — a lot of his words are invented, so just invent a word that rhymes as needed. You’ll see what he means….

And the translation is done by Nadia Budde.

I like the places where they had to put words in the pictures. “The Street of the Lifted Lorax” fits much more neatly than Weg des Entschwundenen Lorax.

I can’t resist giving you the entire first page and sentence:

“At the far end of town
where the Grickle-grass grows
and the wind smells slow-and-sour when it blows
and no birds ever sing excepting old crows…
is the Street of the Lifted Lorax.”

(“At the end of the city, where the Micker-grass stands
and the wind almost soured, when it slowly goes,
and except the crows no bird more crows,
lies the way of the vanished Lorax.”)

(That last line is roughly, “And to where did he disappear? For now he is gone.”)

Here’s a section that loses a little something in translation:

“You won’t see the Once-ler.
Don’t knock at his door.
He stays in his Lerkim on top of his store.
He lurks in his Lerkim, cold under the roof,
where he makes his own clothes out of miff-muffered moof.”

(“You will him not see
and knock better not.
He lives at the top in dim light.
He peeks through the cracks. In cold stale air
sews he his rags,
vermuffelt and crooked.”)
Hmm. She didn’t even try to translate “Lerkim.” Not as many made-up words, but it does give the feeling of the Once-ler’s Lerkim.

“And on special dank midnights in August,
he peeks
out of the shutters…”

(“But on humid days at midnight
will over the see-slit bigger make.”)

Here you can see how it’s changed for the sake of rhyme:
“Then he pulls up the pail,
makes a most careful count
to see if you’ve paid him
the proper amount.”

(“Then he pulls the bucket
up to the roof
and counts his reward
a hundred times after.”)

Again, I don’t think the translation has quite the same charm:
“Then he hides what you paid him
away in his Snuvv,
his secret strange hole
in his gruvvulous glove.”

(“Then stuffs he it all
into his Schmoch:
In the schnorrigen glove
A strange hole.”)

“SLUPP!
Down slupps the Whisper-ma-phone to your ear
and the old Once-ler’s whispers are not very clear,
since they have to come down
through a snergelly hose,
and he sounds
as if he had smallish bees up his nose.”

(“Schlupp!
rushes the Flüsterfon to your ear.
The Einstler-Genuschel crawls laboriously through the tube.
Down through the narrows,
and out of his mouth
sounds it, as if stuck him
Bumblebees in the throat.”)

Ah, and I like this page so much, I have to quote it:

“Way back in the days when the grass was still green
and the pond was still wet
and the clouds were still clean,
and the song of the Swomee-Swans rang out in space…
one morning, I came to this glorious place.
And I first saw the trees!
The Truffula Trees!
The bright-colored tufts of the Truffula Trees!
Mile after mile in the fresh morning breeze.”

(“Long, long ago, still green was the grass,
the clouds all white
and the pond delightfully wet,
and the Schwipp-swans sang, the wind carried it away.
There came I to this glorious place.
And I saw the trees!
The Trüffela-trees!
Here swayed they on the green meadow
the brightly colored Tuffs in the morning breeze.”)

Well, it’s getting late, and I haven’t gotten very far. So I will save the rest for another day. May you experience grün Gras, weiß Wolken, und ein Teich herrlich nass.