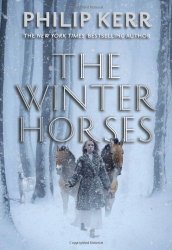 Here’s a World War II tale unlike any other I’ve read. I loved it from the start. This book will appeal to animal lovers as well as readers who like to see an underdog succeed against all odds. I liked the way the people the characters met were good or bad depending on their own values, not on which side of the conflict or what nationality they were.

Here’s what the author has to say about the truth of the tale, before it gets underway:

Much of this old story has been gathered together like the many fragments of a broken vase. The pieces do not always fit as best they might, and indeed it’s quite possible that several of them do not belong here at all. It cannot be denied that the story has many holes and could not withstand much scrutiny. Historians will object – as they always seem to do – and say there is no real evidence that the old man and the girl who are the story’s hero and heroine ever really existed. And yet if today you were in Ukraine and dared to put your ear into the wind or perhaps took a trip across the steppe and listened to the deep voices of the bison, the whoop of the cranes, or the laughter of the Przewalski’s horses, you might learn that about the truth, the animals are never wrong; and that even if there are some parts of this story that are not exactly true, they could be, and that is more important. The animals would surely say that if there is one truth greater than all of the others, it is that there are times when history must take second place to legend.

This preface is the perfect touch to keep our suspension of disbelief in check. At the end of the book, we see a picture of a Przewalski’s horse at the Askaniya-Nova nature reserve in Ukraine today. So the horses did survive World War II. In fact, we’re told that all of the world’s Przewalski’s horses today are descended from just nine of thirty-one horses in captivity at the end of the war. So that’s enough to convince me this beautiful story might have happened.

The book opens at the Askaniya-Nova nature reserve in the Ukraine. The Germans are coming, so the Communists tell Maxim Borisovich Melnik to kill all the animals so the Germans won’t eat them.

Max has no intention of obeying. Wasn’t it a German, the Baron Falz-Fein, who first set up the sanctuary? Wasn’t he the kindest man Max ever knew? And aren’t the Przewalski’s horses a national treasure, and the rarest horses in the world?

Max was not the only person at Askaniya-Nova who was fond of the wild Przewalski’s horses. A girl had been hiding in the woods at the edge of the steppe for some time, and although she had, like many girls, loved horses as long as she could remember, for some reason that even she could not easily have explained, the wild Przewalski’s horses made friends with her. This was just as well since she had no human friends. Her family were all dead, and the few people who inhabited the scattered villages in the region drove her away from their doors because they were afraid – afraid that if the girl was arrested by the Germans, then they might also be arrested. The girl understood this and did not blame them for shunning her; she forgave them for it and told herself she would probably have done the same, although as this story proves, this was clearly not the case.

The Germans do appreciate the horses at Askaniya-Nova – but mainly the beautiful Hanoverian horses, not the wild Przewalski’s horses. Their view, with animals as well as people, is that “inferior” bloodlines should be eradicated.

So they gun down the horses, and neither Max nor the girl, Kalinka, can do anything to stop them. But two horses escape, a stallion and a mare. And just as winter starts up in all its fury, Kalinka and the horses come to Max’s door.

This book is the story of how Kalinka saves the horses, and how the horses save her. Okay, I have to admit it’s on the unbelievable side. Could Kalinka really have formed such a bond with wild horses? But I agree with the author – There are times when history must take second place to legend. This beautiful story is a triumph.

Find this review on Sonderbooks at: www.sonderbooks.com/Childrens_Fiction/winter_horses.html