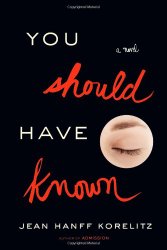 You Should Have Known

I started reading this book with a certain sadistic glee. The story is of a therapist, Grace Reinhart Sachs, who has written a book called You Should Have Known. Here Grace is talking about her book with a reporter from Vogue:

“Look, I’ve been in practice for fifteen years. Over and over I’ve heard women describe their early interactions with their partner, and their early impressions of their partner. And listening to them, I continually thought: You knew right at the beginning. She knows he’s never going to stop looking at other women. She knows he can’t save money. She knows he’s contemptuous of her – the very first time they talk to each other, or the second date, or the first night she introduces him to her friends. But then she somehow lets herself unknow what she knows. She lets these early impressions, this basic awareness, get overwhelmed by something else. She persuades herself that something she has intuitively seen in a man she barely knows isn’t true at all now that she – quote unquote – has gotten to know him better. And it’s that impulse to negate our own impressions that is so astonishingly powerful. And it can have the most devastating impact on a woman’s life. And we’ll always let ourselves off the hook for it, in our own lives, even as we’re looking at some other deluded woman and thinking: How could she not have known? And I feel, just so strongly, that we need to hold ourselves to that same standard. And before we’re taken in, not after….

“Imagine,” she said to Rebecca, “that you are sitting down at a table with someone for the first time. Perhaps on a date. Perhaps at a friend’s house – wherever you might cross paths with a man you possibly find attractive. In that first moment there are things you can see about this man, and intuit about this man. They are readily observable. You can sense his openness to other people, his interest in the world, whether or not he’s intelligent – whether he makes use of his intelligence. You can tell that he’s kind or dismissive or superior or curious or generous. You can see how he treats you. You can learn from what he decides to tell you about himself: the role of family and friends in his life, the women he’s been involved with previously. You can see how he cares for himself – his own health and well-being, his financial well-being. This is all available information, and we do avail ourselves. But then . . .”

She waited. Rebecca was scribbling, her blond head down.

“Then comes the story. He has a story. He has many stories. And I’m not suggesting that he’s making things up or lying outright. He might be – but even if he doesn’t do that, we do it for him, because as human beings we have such a deep, ingrained need for narrative; especially if we’re going to play an important role in the narrative; you know, I’m already the heroine and here comes my hero. And even as we’re absorbing facts or forming impressions, we have this persistent impulse to set them in some sort of context. So we form a story about how he grew up, how women have treated him, how employers have treated him. How he appears before us right now becomes part of that story. Then we get to enter the story: No one has ever loved him enough until me. None of his other girlfriends have been his intellectual equal. I’m not pretty enough for him. He admires my independence. None of this is fact. It’s all some combination of what he’s told us and what we’ve told ourselves. This person has become a made-up character in a made-up story.”

“Yes. It’s not a good idea to marry a fictional character.”

Grace has a beautiful life, with a son Henry at a fine private school and a wonderful husband who’s a pediatric oncologist. Grace doesn’t tell reporters that when she met her husband, she just knew that he was the one for her. It’s sad the way most of her other friends have fallen out of her life. But Jonathan is enough. And too bad that he had such a rotten childhood, and his parents didn’t even come to their wedding.

The reader is not surprised when Grace’s beautiful life begins to fall apart.

Like I said, I rather expected to be gleeful. Here’s one who says you should have known, but in some cases, how can you possibly know?

However, as I read the book, my sympathy for Grace grew to be huge. Yes, she should have known. She had warning signs. But you have complete sympathy for her, since when you’re in love, it’s pretty hard to imagine that this wonderful person is actually a sociopath.

This book actually pairs very well with the dating advice book I recently read, How to Avoid Falling in Love with a Jerk. The problem in You Should Have Known is letting yourself fall in love before you really know the person. Then as you do get to know them, you’re already ready to overlook any flaws, which may come back to bite you later.

So in that sense, this was a therapeutic book to read as I’m starting to date again after my divorce! Nothing like a cautionary tale not to let myself be too swayed by a handsome face!

As for the book itself? I grew to have nothing but sympathy for Grace as her life fell apart and even her story of her marriage in the past had to be modified. And as she tried to figure out how to carry on and how to start life again, I was completely rooting for her, completely on her side. And the book was also therapeutic in thinking about my own marriage. No, my husband wasn’t as sociopathic as Grace’s husband. But some things, on an emotional level, were awfully resonant for me. So if I was applauding Grace moving on with life and putting her marriage behind her, why was I reluctant to do the same?

And the book was lovely, too. We feel realistically hopeful for Grace by the end. It’s not going to be easy for her or her son. But we feel like they’re going to make it.

So therapy, a cautionary tale, and an excellent story all in one package. If the author is saying Grace should have known, at least she’s saying it with compassion.

Find this review on Sonderbooks at: www.sonderbooks.com/Fiction/you_should_have_known.html