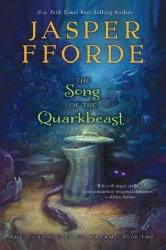 The Song of the Quarkbeast

I love Jasper Fforde’s books. His writing is always quirky, and in this book it’s also quarky. (Sorry, couldn’t resist.)

The story follows after The Last Dragonslayer. Jennifer Strange is still managing the Kazam Agency, but magic in the Ununited Kingdoms is on the rise and the agency is doing better. That is, until Lady Mawgon accidentally gets turned into stone. Then their rival, the Blix Agency, challenges them to a bridge-raising magical duel, and their very agency is on the line. And Blix isn’t afraid to play dirty – having the wizards of Kazam arrested or otherwise incapacitated.

The details are what make Jasper Fforde’s books so much fun. Here are some choice bits:

Since the Kingdom of Snodd granted licenses not by age but by who was mature enough to be put in charge of half a ton of speeding metal, no male under twenty-six or wizard ever possessed a driver’s license. Because of this I was compelled to add taxi service to my long list of jobs.

Or about magical licenses:

I didn’t say anything more, but we all knew the consequences of operating without a license were extremely unpleasant. The relationship between the populace and Mystical Arts practitioners had always been one of suspicion, not helped by a regrettable episode in the nineteenth century when a wayward sorcerer who called himself Blix the Thoroughly Barbarous thought he could use his powers to achieve world domination. He was eventually defeated, but the damage to magic’s reputation had been deep and far-reaching. Bureaucracy now dominated the industry with a sea of paperwork and licensing requirements. Reinventing sorcery as a useful and safe commodity akin to electricity had taken two centuries and wasn’t finished yet. Once lost, trust is a difficult thing to regain.

Or a bit of history thrown in, explaining a magical job:

The point of the Fourth Troll War had been pretty much the same as the first three: to push the trolls back into the far north and teach them a lesson “once and for all.” To this end, the nations of the Ununited Kingdoms had put aside their differences, sending 147 landships on a frontal assault to “soften up” the trolls before the infantry invaded the following week. The landships had breached the first Troll Wall at Stirling and arrived at the second Troll Wall eighteen hours later. They reportedly opened the Troll Gates, and then – nothing. All the radios went dead. Faced with uncertainty and the possible loss of the landships, the generals decided to instigate the ever popular Let’s Panic plan and ordered the infantry to attack.

Of the quarter million men and women in action during the twenty-six-minute war that followed, only nine were not lost or eaten. Colonel Bloch-Draine was one of them, saved by an unavoidable dentist appointment that had him away from his landship at the crucial moment of advance. He retired soon after to devote his time to killing and mounting rare creatures before they went extinct. He had recently started collecting trees and saw no reason why this activity shouldn’t be exactly the same as collecting stuffed animals: lots of swapping and putting them in alphabetical groups. Clearly, moving trees around his estate was not something he could do on his own, and that was the reason Kazam had been employed.

Or the information about Quarkbeasts:

“They don’t so much breed as replicate,” I explained. “They divide into two entirely equal and mirror-opposite Quarkbeasts. But as soon as they do, they have to be separated and sent a long way from each other – opposite sides of the globe, usually. If a paired positive and negative Quarkbeast meet, they are both annihilated in a flash of pure energy. It was said that Cambrianopolis was half destroyed when a confluence of paired Quarkbeasts came together and exploded with the force of ten thousand tons of Marzex-4. Luckily, Cambrianopolis is such a ruin, no one has really noticed.”

The Once Magnificent Boo stared at me intently. “Are you ready to be confused?”

“It’s how I spend most of my days at Zambini Towers.”

“Then here it is: Quarkbeasts breed by creating an exact mirror copy of themselves – and since the Mighty Shandar created only one Quarkbeast, every Quarkbeast is a copy of every other Quarkbeast, only opposite.”

“I was blown backwards yesterday,” I said. “Is that the same thing?”

“No, and if I were you, I would stay that way. It will save your life.”

“No. It’s more complicated than that. They create identical copies of themselves in six different flavors: Up, Down, Charm, Strange, Top, and Bottom. All are opposite and equal, but all uniquely different and alike at the same time.”

“I don’t understand any of this.”

“I have problems with it still, after twenty years,” confessed Boo. “The complexities of the Quarkbeast are fundamentally unknowable. But here’s the point: There can only ever be thirty-six completely unique yet identical Quarkbeasts. If they divide in such a way that all the combinations are fulfilled, they will come together and merge into a single quota of fully quorumed Quarkbeasts.”

“What will happen then?”

“Something wonderful. All the great unanswered questions of the world will be answered. Who are we? What are we here for? Where will we end up? And most important of all: Can mankind actually get any stupider? The Quarkbeast is more than an animal; it’s an oracle. It assists in mankind’s elusive search for meaning, truth, and fulfillment.”

That should give you the flavor. If you’re ready for some clever but silly fun, I highly recommend this and all of Jasper Fforde’s other books.

Find this review on Sonderbooks at: www.sonderbooks.com/Teens/song_of_the_quarkbeast.html