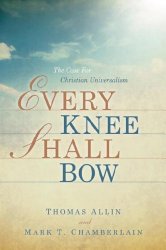 Every Knee Shall Bow

The Case for Christian Universalism

In the Introduction to this book, Mark T. Chamberlain explains that it began as a revision of Thomas Allin’s earlier book, and ended up being more of a collaboration.

From my earlier reviews, anyone who’s been paying attention will realize that I have become an Evangelical Universalist, and I appreciate books that explain Evangelical Universalist beliefs and why they completely fit with the teaching of the Bible and the God we worship. Every Knee Shall Bow is one of the more enthusiastic and dogmatic of these texts, but I, already agreeing with them, found this refreshing.

I don’t think this would be the best place to start for traditional evangelicals who wonder about Universalism. However, people who have been repulsed by Christian teachings about hell may be delighted to find here a very different view, which is still Biblical, and held by more and more Christians.

As I said, this book is enthusiastic and dogmatic. I’ve kept in the exclamation marks in the text below:

Whenever I tell people that I don’t believe a loving God would allow His children to end up in eternal hell, they always answer, “Yes, God is a God of love. But He is also a God of justice.” I firmly believe in God’s justice, but by what stretch of the imagination can eternal hell be considered just? Especially when it is not only for murderers, rapists, child molesters, and torturers, but also for moral people, religious people, even kind and loving people whose “only” crime is that they didn’t pray the sinner’s prayer!

Don’t get me wrong. I believe in Romans 3:23 that “All have sinned and fall short of the glory of God.” I believe that all of us deserve to be punished, but eternal torment?!! Can you honestly look at your unsaved relatives and say that they deserve to be tormented by demons forever? Some would say that teaching the ultimate salvation of all would either weaken or completely remove any belief in future punishment. The exact opposite is true. Most people will only believe us when we say that a just and loving God must punish sin when we teach a plan of punishment that is reasonable and credible. A penalty that seems unspeakably cruel, shocking, even monstrous loses all force as a threat! Only Universalists fully recognize both the guilt of sin and the need for a just punishment, one that fits the crime!

Let me start out right here with a protest against the totally false view that Christian Universalists have lax views of sin or doctrine. No view so effectively proves God’s hatred of sin as this view that teaches that He cannot and will not tolerate its existence forever! …

Next I would like to say that any teaching that says even one soul will be eternally lost strikes a blow at both the incarnation and the atonement!

Some think that to believe in the ultimate salvation of all implies the escape of the wicked from all punishment and places the sinner on the same level as the saint. Let me reply once and for all that nothing could be farther from the truth. For the Christian Universalist or the believer in the wider hope, as it has been called, we believe that the very method God uses to bring those who die unsaved into a saving relationship with Christ is the severity of the divine judgment, the consuming fire, that burns up all iniquity. The wider hope teaches the certainty of punishment for the obstinate sinner, because it sees God’s judgment as the mode of cure. Unrepented sin leads to an awful future penalty, a penalty that is in proportion to the guilt of the sinner, and is continued until he repents. Christian Universalists not only accept but also emphasize the terrible warning of punishment to come, because they see punishment not as needless cruelty with no purpose, but as both justice and discipline that brings the sinner to repentance.

The main question of the debate is this: Can evil ever be stronger than God? Can a Father allow the endless, hopeless sin and misery of even one of His children, and calmly look on forever and ever, unmoved and unsympathizing? The Bible speaks in Acts 3:21 of a “time for restoring all things” and in 1 Corinthians 15:28 of a time when “God will be ALL IN ALL.” And in Colossians 1:20, it speaks of God reconciling ALL things to Himself through Christ! If these verses don’t teach the salvation of all, words have no meaning!

People always tell me that all chances for salvation end at a person’s death. But where is this taught? The only passage of scripture I have ever read or heard anyone try to use to prove this is Hebrews 9:27. Let’s look at it: “And just as it is appointed for man to die once, and after that comes judgment.” How does this verse teach that there are no further chances for salvation after death? Where does it say in this verse that after the judgment comes eternal hell? Nowhere! If God wants to hand down a different sentence to each individual according to the light he or she had and the sins that have been committed, why can’t He?

The author goes on to look at many Biblical arguments for Universalism, as well as the history of this view back with the Church Fathers. I like this paragraph in particular:

I protest against teaching that “all” means “all” when it is talking about sin and death, but that “all” means only “some” when spoken of final salvation. The restoration of all things means, we are told, that only some beings are to be restored, while the rest are tortured forever or annihilated. That God will be “all in all” means that millions will be cast into hell forever to hate God and blaspheme Him forever and only a few will be saved. That His tender mercies are over all His works means, in the traditional creed, that His tender mercies expire at the gates of hell. It is ludicrous that those who believe in everlasting hell charge us with evading the words of Scripture.

You can tell that the author does not go easy on the traditional view. As such, this might not be the best book to convince someone who has long and conscientiously felt that it is the only Biblical view. They may not like the way he characterizes their cherished beliefs.

Now, he does look at the original Greek of many Biblical texts. He says, “I believe that not one passage found anywhere in the Bible teaches endless suffering when fairly translated and understood.”

At the very least, you can feel the author’s passion for his subject. Here’s a section from the summing up chapter at the end:

The popular creed makes sin eternal, although God’s Word says that Jesus came to put away sin. It makes God’s wrath eternal, although Scripture says that it is only for a moment. It denies the Scripture in 2 Peter 3:13, which says that we are waiting for a new heaven and a new earth in which righteousness (and by implication, only righteousness) dwells. It never explains how the saints can enjoy heaven while their mothers and fathers, sons and daughters, and husbands and wives are suffering unspeakable agony in hell. It never explains how God can be all in all when there exists a place for all eternity where men and women will join their shrieks of agony with curses and blasphemy toward the God, who claimed to be their Father, but has abandoned them.

What would we think of a woman or a man who took pride in keeping an immaculate house who swept all of the dirt into a room away from the rest of the house? Not only that, but what if she or he cleansed the things in the house that least needed cleaning and reserved only the filthiest things for sweeping into the room? That is what the God of eternal hell does. He cleanses some of the filth in His house, but the worst of it He sweeps into a “room” called hell, where it’s out of sight, out of mind. And worst of all, the dirt He sweeps into this dreadful “room” called hell is not inanimate objects but people – people who for all their faults still have feelings, who have other people who are dear to them and people they are dear to. Worst of all, God, their Creator, once said that He loved them so much that He sent His Son to die for them. Some of them didn’t even know about Him and His professed love for them! But now it’s too late. They are lost forever!

Find this review on Sonderbooks at: www.sonderbooks.com/Nonfiction/every_knee_shall_bow.html