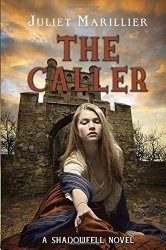 The Caller is the third book in the trilogy begun in Shadowfell. You should definitely read the books in order. This is a wonderful culmination and completion of the story.

The book did not go as I expected. Neryn was planning to complete her training from the last two Guardians, and then go to the Gathering at Midsummer and Call the Uncanny Folk to fight on the side of the rebels. But early on, people and situations require her plans to be changed. The servants of the White Lady have been killed. The king, who rules the land with a reign of terror, has found a Caller of his own. He is planning to Call the folk to fight on his own side, and he doesn’t mean to ask nicely.

Meanwhile, Neryn’s beloved is in the middle of it all. It’s getting harder and harder for him to keep up the pretense of being a loyal king’s man. And how can he stand by while the Good Folk are being harmed?

Here’s how the book begins, in a Prologue that gets right into the action and the tension:

Done. He was done. No more lies; no more acts of blind savagery; no longer any need to pretend he was Keldec’s loyal retainer. His precarious double life as Enforcer and rebel spy was over. He had turned his back on it, and he was going home.

Crossing country under moonlight, he pondered what his sudden decision would mean. He would be at Shadowfell, the rebel headquarters, over the winter. He would see Neryn again: a precious gift, though there would be little time alone together in that place of cramped communal living. His arrival there would bring a double blow for the rebels, for he carried not only the news of their leader’s death, but also an alarming rumor, passed on to him by the king himself. Another Caller had been found; Neryn was not the only one. If true, these ill tidings set the rebels’ plan to challenge Keldec at next midsummer Gathering on its head. An expert Caller should be able to unite the fighting forces of humankind and Good Folk into one mighty army. He shuddered to think what might happen if two Callers opposed each other. He must take the news to Shadowfell as fast as he could. That, and his other burden.

I wasn’t willing to wait for the library to get this one – I preordered it as soon as I heard it was coming out. And I am glad I did; I will want to reread this trilogy many times, to once again enter the ancient Alban of Juliet Marillier’s brilliant imagination.

Find this review on Sonderbooks at: www.sonderbooks.com/Teens/caller.html