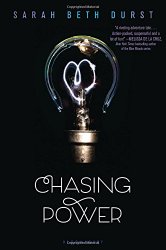 Sarah Beth Durst does it again! She manages to make her paranormal novels distinctive and loaded with magic, and unlike anything that’s gone before.

What would you do if you had the power of telekinesis – able to make things move using only the power of your mind? Kayla has that power, at least for very small things. And what she chooses to do with it is steal.

She uses little things like a razor blade, thread, gum, a ball of tinfoil, and a dull fishing hook, and she uses them cleverly to take jewels and money from the upscale shops on State Street in Santa Barbara, California, in such a way that no one notices.

Kayla lives with her mother, Moonbeam, in Santa Barbara. For years, they’ve been in hiding from her father, who killed her older sister Amanda. Although Moonbeam has protective spells all around the house, she insists that Kayla not use her magic, or do anything at all that might gain her father’s attention.

Kayla doesn’t want to have to run again. They’ve been in Santa Barbara for eight years, and Kayla even has a best friend, Selena. But her mother doesn’t know about Kayla’s little adventures in State Street, or that this is how Kayla gets money to take care of them.

However, after she pulls off a jewelry store heist seamlessly, without arousing anyone’s attention, she notices a boy across the street, watching her.

He was tall with black hair that dusted over his eyes. Unlike the others, he wasn’t pierced or tattooed. He wore a clean black T-shirt and black jeans with boots. Kayla felt his eyes on her as she walked by and for an instant, she thought, He saw me; he knows. But no, that was impossible. It was far more likely he’d noticed her pink-streaked hair or her bikini top, which was the point of both. Also, she liked both. She flashed him a smile as she passed.

He didn’t smile back.

It turns out, the boy does know. And he’s got magical powers of his own, like nothing Kayla has ever seen before. But his mother has been kidnapped, and he wants Kayla’s help. Her magical help.

What follows is a wild adventure, traveling all over the world in quest of three ancient magical stones. They go to an ancient Mayan temple, to the Voodoo Queen of New Orleans, and many more places. It’s no surprise that someone else is after the stones, too, and whoever it is doesn’t seem concerned about keeping Kayla alive.

I like Kayla’s friend, Selena, and her computer help, getting background information. I like the realistic problems they deal with, while trying to access ancient magic – not staying out too late, for example, or getting Selena’s parents to approve of the boy she likes.

And then there’s this boy, Daniel. He wants Kayla’s help, but he doesn’t think to ask nicely for it. But here’s someone with magic, like her – and how did he know her name, anyway? And why does he have pictures of Kayla’s parents, together?

I’m not sure if I completely believed the way everything tied up at the end, but I was definitely happy with the Epilogue. I do like the way Sarah Beth Durst writes romance. The teens feel real – not perfect, but real. And this book – with the adults even more imperfect than the kids – wraps up in a nice way for the teens involved. An excellent read – a paranormal romance with some heft.

Find this review on Sonderbooks at: www.sonderbooks.com/Teens/chasing_power.html