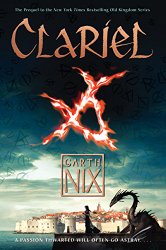 I’m crazy about Garth Nix’s other books about the Abhorsens of the Old Kingdom, Sabriel, Lirael, Abhorsen, and Across the Wall. So I preordered Clariel. My copy came in the very day I was told I get to be a Cybils first round judge for Elementary and Middle Grade Speculative Fiction. I needed to get reading for the Cybils, but I couldn’t resist reading Clariel first.

According to my review, I read Lirael ten years ago. No wonder I don’t remember the character Clariel turns out to be (which Garth Nix tells us at the end). I did remember some details about the Old Kingdom, such that the Abhorsen can walk into Death and that Charter Magic holds the kingdom together, and Free Magic creatures are dangerous and evil. All that would be quickly learned if you decided to start with Clariel, since it is, after all, a prequel.

However, I’d rather people started with Sabriel. I think it’s a better book and will win more fans than Clariel. Clariel gives us something of a downer of a story, epitomized in the tagline printed on the cover: “A passion thwarted will often go astray. . . .”

Clariel has come with her parents to the capital city of Belisaere, where her mother enjoys honor as the greatest Goldsmith in the kingdom. Clariel hates it, and wants to go back to the Great Forest. But her parents have other ideas. They are related to the King and the Abhorsen, and her parents want her to marry the governor’s son and become the next Queen.

The Charter Mages her parents engage to tutor Clariel promise to help – if first she will do them a small service and help them find a Free Magic creature they believe is lurking in Belisaere, probably connected with the governor.

“But how can I help?” asked Clariel.

“Like many of the Abhorsen line, you have a strong affinity for Free Magic, and great potential to wield it,” said Kargrin. “The rage is one indicator of that, and there are other signs within you. Like seeks like, and once it becomes aware of you this creature will seek you out in order to augment its power. It is the nature of such things that they must test each other, and the lesser fall under the will of the greater.”

So Kargrin uses Clariel essentially as bait to bring out the Free Magic creature. The consequences are more than he bargains for.

This is the first of the Old Kingdom books Garth Nix has written that I didn’t love. Though his writing still captivates me, the story is too sad for me. There’s some awful violence and some vengeance – and it’s just not as uplifting as the other Old Kingdom books. And indeed, “passion thwarted will often go astray,” but I found it sad to read about.

This book doesn’t tell as many of the details of how the Abhorsens travel in Death and how the bells work and how the Charter works, so it might be confusing to those who haven’t read the earlier books. So even though the action takes place before Sabriel, I’d still recommend beginning with Sabriel. Then if you’re like me, you’ll be so hooked on the Old Kingdom, you’ll read anything written about it, even if it does seem a bit tragic.

I was very happy to read at the end that Garth Nix is now working on a book about Lirael and Nicholas Sayre, and what happens to them after Across the Wall.

Find this review on Sonderbooks at: www.sonderbooks.com/Teens/clariel.html

Source: This review is based on my own copy, preordered from Amazon.com.