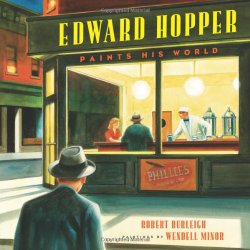 I’ve got a soft spot for picture book biographies of artists, especially when the illustrator does such a wonderful job of evoking the subject’s artwork.

Both author and illustrator of this book did their homework. The author tells how, from childhood, Edward Hopper planned to be an artist. He doesn’t linger long in childhood, but talks about how Edward pursued his goal singlemindedly, even though it took years before he won recognition. Here’s a typical page:

Because he was fascinated by the look and feel of old houses, Edward began to make paintings of them. Once he remarked: “All I want to do is paint sunlight on the side of a house.”

But maybe Edward liked to paint houses for another reason. Many houses in his paintings seem moody, quiet, and alone. Were Edward’s houses a bit like Edward himself?

Another page explains one of his most famous paintings, and the illustration, with Edward Hopper looking at the scene, isn’t exactly like the painting.

But Edward didn’t just copy what he saw. His paintings often combined things he sketched on his travels: a café on a deserted street corner, customers drinking coffee, lost in thought – or dark shadows on an eerie green pavement.

Starting with scenes and details like these, Edward used his imagination to create some of his best-known pictures. One famous painting shows solitary people sitting at a counter in an all-night diner. The painting is called Nighthawks.

“I was painting the loneliness of a large city,” he later explained.

The paintings illustrating this book are beautiful in their own right. I found the Artist’s Note especially interesting:

. . . In this book, I tried to create the feeling of Hopper’s art while maintaining my own style. Upon careful observation, the reader will notice many differences in my interpretations of the four famous Hopper paintings in this book. My idea was to evoke the familiar through Hopper’s point of view. . . .

In this book, Robert Burleigh and I have attempted to give the young reader an introduction to the artist’s process of discovery. We see Hopper observing subjects, and we try to imagine what it might have been like to be there with him. Hopper sometimes sketched and painted his subjects on-site, but other times, he would return to his studio and sketch his observations from memory. His work is a combination of the real and the imagined. The best example of this is perhaps his most famous painting, Nighthawks. My research has shown that the all-night café in his painting never really existed. Hopper created this imaginary place from the many different scenes he encountered on his walks through New York City’s streets – and he did it in such a way that the viewer is convinced they know this café to be real. Such is the power of creativity! Robert Burleigh and I hope that we will inspire young artists everywhere to observe and then create wonderful pictures of their world.

I feel confident the author and artist are succeeding in that goal.

Find this review on Sonderbooks at: www.sonderbooks.com/Childrens_Nonfiction/edward_hopper_paints_his_world.html