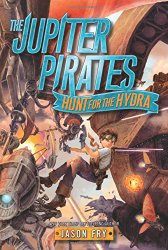 Hunt for the Hydra

Set in the far distant future, this new series, The Jupiter Pirates tells about Tycho Hashoone, a kid who lives on a spaceship. In fact, he’s from a family with a heritage of being space pirates for generations.

Now, however, they are not pirates, but privateers.

As Tycho’s mother, Diocletia, never failed to point out, privateers weren’t the same as pirates. Pirates ignored the law, preying on any spacecraft that had the misfortune to stray into their gunsights. They stole cargoes and mistreated the ships’ crews they imprisoned – if they didn’t sell them into slavery or kill them.

Privateers conducted themselves differently. They obeyed the laws of space, kept careful records about the cargoes they seized, treated prisoners well, and released them as soon as possible. And they used force only when necessary. Those rules were part of the Hashoones’ letter of marque, the document that authorized them to attack enemy ships on behalf of their home government, the Jovian Union, composed of the nearly two dozen inhabited moons of Jupiter, Saturn, and Uranus.

The book begins with Tycho in command of the family’s ship, during the night watch. His mother, the captain, allows him to stay in command while they intercept a freighter from Earth, an enemy ship. However, the ship claims diplomatic immunity because of a diplomat on board. But there’s something fishy about that claim.

The family must go to court on the neutral dwarf planet Ceres. This leads into suspicious things to investigate, more space travel, encounters with actual pirates, and battles in space.

This book is fun, if not weighty. Tycho has a twin sister, Yana, and together with their older brother Carlo, the three are in a competition to see who will get to inherit the captaincy of their ship some day.

When Carlo or Yana was in command of the Comet, Tycho of course wanted them to succeed: every prize taken was more money for their family and helped the Jovian Union in its struggle against Earth. But he didn’t want them to do too well and hurt his own chances at the captain’s chair. Ideally, something would go wrong – something that wasn’t bad enough to endanger the ship and their lives, but bad enough that their mother would notice and remember. But that was a dangerous game. In space, things that went wrong had a way of proving fatal.

Their grandfather, Huff, is on board, so injured in the past that almost half of his body parts are artificial. He’s still a bloodthirsty pirate at heart, and he seemed a bit stereotypical. Maybe he was intended as comic relief? I got a little annoyed by the “Arrrr”s he threw into conversations.

But all in all, this is a fun story about legal and humane privateering with a mystery and space battles and a kid who gets to command a spaceship.

Find this review on Sonderbooks at: www.sonderbooks.com/Childrens_Fiction/jupiter_pirates.html