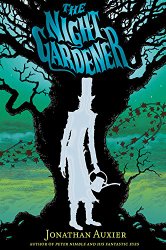 Let me say right from the beginning that this book is not for everyone. It would have been way too scary for me when I was in upper elementary and middle school. However, for kids who like a dose of fear and creepiness with their adventures, this well-crafted tale delivers.

Molly and Kip are kids from Ireland, and they’re traveling in England without their parents, looking for work, looking for food, looking for a place to stay. They left Ireland because of the famine, and it’s not clear what happened to their parents. Molly speaks bravely about the adventures their parents must be having, but Molly’s a storyteller, and those adventures don’t sound all too likely.

The book opens with Molly and Kip trying to find their way to an estate owned by the Windsors. A lawyer in town said they could work for that family. But when she asks directions, over and over she’s told things like “My advice: go back to whatever country you came from. The sourwoods is no place for anyone.”

They find a storyteller who looks like a witch who’s willing to tell them the way – if they’ll bring her back some stories. It turns out that the estate is on an island in the river.

The heart of the island had been cleared away to create an open field surrounded by dark trees. The lawn was not flat but covered in a series of miniature hills, each ranging between one and two feet in height. Wind swept across the grassy mounds to create an effect that reminded Kip of rolling ocean waves. At the far end of the lawn stood the Windsor mansion. The house had obviously been left vacant for some years, and in that time it seemed to have become one with the landscape. Weeds swallowed the base. Ivy choked the walls and windows. The roof was sagging and covered in black moss.

But strangest of all was the tree.

The tree was so close to the house that they almost seemed to have grown together – its gnarled trunk running up the wall like a great black chimney stack. Palsied branches crept out in all directions like a second roof – including a few that appeared to cut straight through the walls. “It’s almost a part of the house,” Kip said softly.

Why any person would build a home so close to such a terrible tree was beyond him. Had it been too difficult to cut down?

When they enter the home, they aren’t exactly welcomed. But they have nowhere to go, so it is agreed that they’ll work in exchange for lodgings. The family consists of a lonely little girl, a spoiled older brother, a sharp and worried mother, and a father who is preoccupied, timid, and often absent.

And the mysteries pile up, slowly and eerily. There’s a door, supposedly to a closet, which is locked and which is forbidden. There’s a portrait of the family, painted only last summer, which shows them looking far more plump and healthy, far more colorful in skin, eyes, and even hair. Everyone living in the house has nightmares. But most sinister of all, a man is walking in the house at night.

Molly hears thumping footsteps. The door to her bedroom has come open, and dead leaves and wind have come in. There are muddy footprints leading right to the side of her bed, the same heavy, muddy footprints she’d cleaned from the stairs during the day. She goes to investigate.

Mistress Windsor’s bedroom was at the end of the hall. Molly could hear the woman murmuring, caught in her own nightmare. She could hear the footsteps again – heavy and slow. Through the crack around the door, she saw a tall shadow move inside, a shadow the size of a man. “Master Windsor, is that you?” she said as bravely as she could.

Molly wiped the perspiration from her palm and adjusted her grip on the candlestick. She took a deep breath and inched toward the door. A howl split the darkness, and she felt a great burst of wind. The gust knocked her to the floor and swept along the upstairs hall. She covered her face as dry leaves skittered over her like bats from a cavern.

She heard a loud slam behind her, and the next moment, everything was still and dark. Molly climbed to her feet, trembling with fright. She felt her way along the wall until she reached the main stairs. She could hear no footsteps. The wind and leaves were all gone. The bedrooms were silent, and the front door was safely shut. The house was completely still. By the time she reached the bottom of the stairs, it almost seemed as if she had dreamed the whole thing.

Molly was about to turn into the service hall when a shadow caught her eye. There, lying in the middle of the floor, was something that hadn’t been there before. It was an old top hat, tipped on its side. Molly remembered Kip’s words. “A tall black hat,” he had said. Molly knelt down and picked it up. It was as real as anything she’d ever touched, its brim damp with mildew and age. She slowly turned the hat over in her hand – dead leaves spilled from the crown, forming a pile at her feet.

Molly stared at the silent house, which only moments before had been filled with leaves. It wasn’t a dream. Kip, Penny – they had both been telling the truth.

The night man was real.

And that’s only the beginning. I love the way Jonathan Auxier spins this tale. He’s not explicit about the magic of the tree and the house. But you gradually learn, along with Molly, why the family would stay in such a place. And while you’re mentally urging Molly and Kip to just leave, you watch with horror as Molly, too, gets ensnared.

I won’t enjoy a book just for being creepy. The skillful plotting does go a long way toward winning me over, but I think what makes me love the book is the good-heartedness of Molly and Kip. Even the Windsor family grows on you, but Molly and Kip have been given a rough deal in life, and they come through with resourcefulness and kindness.

I don’t think it’s a spoiler to tell you the book has a happy ending – an earned one. I wouldn’t want to read it if all that scariness really did lead to doom. There are, however, a couple of violent deaths along the way, so I think my warning that the book is not for everyone stands.

Creepy and well-crafted, I will keep this book in mind for the next kid who asks me for “a scary book.”

Find this review on Sonderbooks at: www.sonderbooks.com/Childrens_Fiction/night_gardener.html