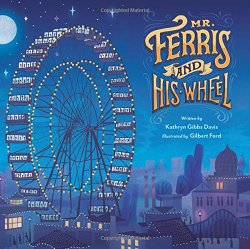 Mr. Ferris and His Wheel

I love this kind of nonfiction for kids – It’s engaging and simply told, with plenty of facts, but written to be read and enjoyed, not to use as reference for a report.

This is a picture book, and the illustrations are beautiful, evoking the time of the Chicago World’s Fair, when Mr. Ferris built his wheel.

The author tells the tale as a suspenseful story, with supporting facts alongside. Here’s an example page:

Now it was America’s turn to impress the world at the 1893 Chicago World’s Fair. But what could outshine the famous French tower? And who would build it? A nationwide contest was announced.

Here’s the sidebar on that two-page spread, in a corner and printed in a smaller font:

Before TV and the Internet, people from around the globe gathered at World’s Fairs to share their different ways of life and new technologies. Tasty inventions such as hamburgers and Cracker Jack first appeared there!

It goes on to dramatize George Ferris getting the idea, submitting his plans, and the large technological challenges they faced. One of the pages during the construction phase shows spectators who are critical and skeptical that the thing will stay up, let alone actually work.

The author and illustrator dramatize the completion, and the very first ride, giving us a feeling of the majestic spectacle the wheel made, as well as the sweeping view of Chicago.

All summer, visitors from around the world traveled to the Chicago World’s Fair. It didn’t matter whether one was a senator, a farmer, a boy or girl. Everyone wanted to take a spin on the magnificent wheel. Adventurous couples asked to get married on it! On hot, steamy days, the wheel was the perfect place to escape up, up, up into the cooling breezes. All you needed was fifty cents.

[Sidebar:] During the nineteen weeks the wheel was in operation, 1.5 million passengers rode it. It revolved more than 10,000 times, withstood gale-force winds and storms, and did not need one repair.

Let’s hear it for a book that highlights the heroism and accomplishments of an engineer! This book tells a good story, but it will also capture kids’ imaginations. A page at the back supplies further reading and websites. Who knows? This book may inspire future engineers.

Find this review on Sonderbooks at: www.sonderbooks.com/Childrens_Nonfiction/mr_ferris_and_his_wheel.html