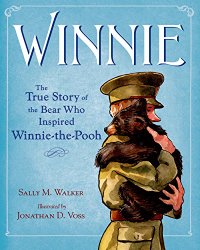 The True Story of the Bear Who Inspired Winnie-the-Pooh

It’s books like this that make me wish we had a separate children’s browsing section for Nonfiction, rather than interfiling them with adult books. This is not a book for children looking for the subject of Bears, although that is where it is filed. This is a heart-warming picture book story that happens to be true.

I knew that the name of Winnie-the-Pooh was inspired by a bear Christopher Robin visited at the London Zoo. This book tells the story of that bear.

The bear was born in Canada during World War I. A veterinarian who took care of the horses in the Canadian army saw the bear for sale when his regiment stopped at a train station. The man said he didn’t see the cub until after he’d shot her mother, so Harry Colebourn bought the bear and named her Winnipeg, after his company’s hometown.

Winnipeg, whose name was quickly shortened to Winnie, was friendly and affectionate to the whole troop, but especially to Harry. She traveled with them to training camp in Quebec and then across the Atlantic Ocean.

But when the company was sent to the fighting in France, Harry decided that Winnie would be better off in the London Zoo, which had a new exhibit for bears. Winnie adjusted so well that four years later, when the war ended, Harry decided she should be allowed to stay.

Even though this book has a back story of war, the author and illustrator have made a very readable, light-hearted tale. They show Winnie cuddling and playing with Harry and the other soldiers. I was very surprised that the London zookeepers actually let children ride on Winnie’s back and feed her condensed milk with a spoon. It’s hard to imagine any zookeepers anywhere allowing that today, but perhaps it’s a testament to how gentle Winnie was.

And it’s fitting that the bear who inspired one of the greatest books of children’s literature should now have her own story told. Fans of Winnie-the-Pooh will love hearing the back story, but this story goes beyond that and simply tells a heart-warming story of a young man and a bear who was generous with her affection.

Find this review on Sonderbooks at: www.sonderbooks.com/Childrens_Nonfiction/winnie.html