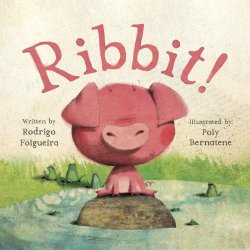 One morning, a surprise visitor is in the frog’s pond.

It was a pig – a little pink pig sitting on a rock.

When they ask the pig what it’s doing there, the only thing the pig says is, “Ribbit!”

The frogs get into a tizzy about it:

Soon, the other animals of the forest hear about the pig who thinks he’s a frog. They start teasing the frogs, and doing their own speculating.

The animals laughed and laughed –
and the frogs got angrier and angrier –
until, finally, the chief frog shouted out . . .

We’re not getting anywhere by fighting!
We must go and find the wise old beetle.
He’ll know what to do.”

This book has the fun of animal sounds, a lovely twist ending, a nice message, and wonderful illustrations. Just see if you don’t get a giggle every time the pig says “Ribbit!” This is another book that makes me itch to read it aloud.

Find this review on Sonderbooks at: www.sonderbooks.com/Picture_Books/ribbit.html