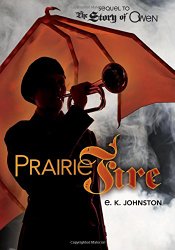 After finishing Prairie Fire, my love for The Story of Owen has only grown. I didn’t read the books quickly — they are thoughtful, intriguing, world-building stories rather than page-turners. In fact, I may have lingered longer for not wanting it to end.

The sequel caps the Story of Owen. It’s essentially one story, told in two parts, so you will want to read the first book before this one.

Again, summing up is easy: Modern-day Canada. With dragons.

In this book, Owen and his girlfriend Sadie, and his bard Siobhan (who tells the story) all enlist in the Oil Watch. The Oil Watch is their world’s version of an international military force defending oil fields and people against dragons. Work in the Oil Watch is mandatory for dragon slayers, but Siobhan also signs on, as part of Owen’s crew.

Every dragon slayer has a dedicated support crew. This book tells about their team in the new challenges of the military. And new types of dragons they must fight. Here’s the explanation of Owen’s team:

Every support squad had eight firefighters; a pair of engineers — one sapper and one smith — two medics, one of whom could double as a cook if you were on patrol; and in Owen’s case alone, one bard. All of them were older than Owen and I were. The Combat Engineer, Courtney Speed, was twenty-four and had a master’s in engineering from the Royal Military College. This was unusual, as most people in the Oil Watch, including our smith, Aarons, had at most only an undergraduate degree. The firefighters had all completed a two year college program, and the medics had bachelor degrees in addition to their year-long medic training course. Davis, the medic who was also the cook, planned to go to medical school when his tour was up. In those first days I despaired of ever learning their names, let alone coming up with ways to write them into Owen’s songs. I was more than a little bit intimidated, and I didn’t even have to be in charge. Owen was supposed to be in command and would eventually be given the highest rank It was really important that everyone got along.

That’s the style — lots of details, but so intriguing. And we see more ways their world is dramatically different from the one we live in — because of dragon. There’s a huge tunnel through the Rocky Mountains, for example. And totem poles are to keep giant dragons from landing.

I also love the way Siobhan’s friendship with Owen grows and deepens. And yet never gets romantic. They have a fantastic working relationship. And when is that ever portrayed in books without romance? Owen’s girlfriend is also Siobhan’s friend, though she gets assigned to a different part of the world. And Siobhan meets some men who are interested in her. And she’s not portrayed as gay, but she doesn’t fall in love in this book. And somehow I find that wonderfully refreshing — a book where the characters become adults and pursue their callings and build lasting friendships — without making the whole point of it to be falling in love.

I should warn readers that the ending is a tear-jerker. This is not something that will leave you smiling — but it will leave you thinking, and will linger in your heart for a long time to come.

Find this review on Sonderbooks at: www.sonderbooks.com/Teens/prairie_fire.html