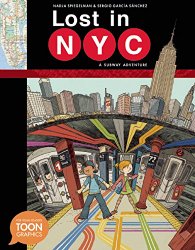 Here’s a story that makes the most of the graphic novel format and throws in plenty of facts – even historic photographs – about New York City and the subway system.

Pablo’s first day of school in New York City happens to be the same day his class is going on a field trip, riding the subways, to the Empire State Building. Alicia helpfully offers to be his partner, but he is wary of making friends, since his family moves so often.

With Pablo’s inexperience, Alicia and he get separated from the class, and then Pablo gets separated from Alicia. However, Pablo knows where they’re going and asks for directions. Alicia uses her knowledge of the city to walk to the Empire State Building, and the class rides the subway. The graphic novel is perfect for showing how the three different groups take three different routes.

Along the way and in the back of the book, we get the history of the subway and facts about New York City.

And we’re told about another nice touch at the back. When the illustrator, Sergio Garcia Sanchez, was researching in preparation for drawing pictures of the subway stations, he took lots of pictures, and then noticed a policeman keeping a wary eye on him. So on almost every spread of the book, he included himself taking pictures and being followed by a cop. And of course once the reader finds that out, you go back to spot Sergio and the Cop in every crowded subway spread.

Even though this is a story about getting lost, I think the happy ending will help kids approach something potentially daunting – like riding a subway – without fear and with confidence.

Find this review on Sonderbooks at: www.sonderbooks.com/Childrens_Fiction/lost_in_nyc.html