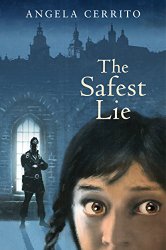 Full disclosure right up front: The author of this book is a friend of mine. We were in a writers’ group together in Germany. So naturally, I snapped up an Advanced Reader Copy of her book when she told me they were available at ALA Annual Conference.

This is a Holocaust book. So honestly, I might not have picked it up if my friend hadn’t written it. But it’s yet another story of the Holocaust I hadn’t heard before. This book is about a Polish Jewish girl from the Warsaw ghetto who is smuggled out and stays in a series of homes, finally with a Polish Catholic family whose own daughter looked like the “master race” and had been sent to Germany.

Anna Bauman is nine years old when she’s told that she needs to be Anna Karwolska. Her Mama and Papa send her away to keep her safe, and she goes along with different heroic people, learning how to appear Catholic at an orphanage, always afraid of the ever-present German soldiers, seeing other people resisting and other children in hiding.

Anna has to learn Anna Karwolska’s birthday and history. She remembers her grandmother’s saying: “The safest lie is the truth.”

I like the scene where a German soldier is questioning the children at the orphanage. It’s sinister, but I like the way Anna turns it around.

Then he asks a question that I’ve never practiced. “What type of work does your father do?”

“My father is dead, sir.” I don’t feel sad or afraid telling him that my father is dead. I never knew Anna Karwolska’s father. Maybe it would help if I share a bit of truth. “He made furniture.” I want to catch the words as soon as they are out of my mouth. I don’t know if making furniture is a job only a Jewish papa would have.

But the soldier just nods his head, as if he’s bored. “What type of food did you eat for Christmas dinner?”

“The very best of food.”

“All types. There were sweets and meat and vegetables and . . .” — I swallow, thinking of all the good food — “sweets.”

“I’m not sure. I was very young and it was so long ago.” It’s true. Anna Karwolska would have been even younger than I was before the war began.

“Anna. Anna. Anna.” I don’t like the way he says my name. “Have you answered every question truthfully?”

The soldier reaches under the table and a moment later metal clinks against the wooden tabletop. “Do you know what that is?” I do, but I can’t speak. “It’s my gun.” He smiles.

It’s a shiny silver gun with a black handle. There’s a screw connecting the handle. It seems like if I had the right tool and a moment to myself, I could remove that screw and the whole gun would fall to pieces.

“I will use this gun, Anna. If you’ve told me a lie, I will shoot you and all the other children here. Do you understand?”

The screw is a small silver circle on a black rectangle. “It’s not made properly,” I say, staring at the screw.

“The gun. It’s not made properly. There’s a screw showing on the outside.”

“Anna. This is very serious.”

I know it’s serious. I understand that more than any of the other girls in this room. “My papa always said that when furniture is made correctly, no one can see how the pieces are put together. But with your gun –”

He laughs. “Anna, you really are the daughter of a carpenter.”

A nice addition to the book is the Author’s Note at the back, where Angela Cerrito tells of her chance to meet Irena Sendler, a Polish woman who saved Jewish children, was tortured for it, and continued to save Jewish children during the war. This explains the ring of truth to the book. I love that this book is a tribute to those who risked their lives to save others.

Find this review on Sonderbooks at: www.sonderbooks.com/Childrens_Fiction/safest_lie.html

Source: This review is based on an Advanced Reader Copy I got at ALA Annual Conference.