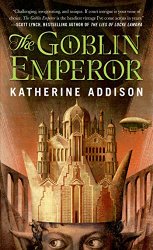 This is the sort of book that usually gets me telling people I don’t particularly like fantasy written for adults — so much detail in the world-building! So many strange names and strange cultural facts! So much strangeness in names and terminology!

However, unlike some others which I won’t name, Katherine Addison won me over completely with her story, despite the abundant detail. I found myself completely caring about the protagonist and even about his detailed choices — which at first I’d been impatient about.

Maia is the half-goblin fourth son of the elven emperor. His father is ashamed of him — he looks far too much like his goblin mother. He only met his father at his mother’s funeral, when Maia was 8 years old, and then was sent back into exile, accompanied only by a tutor who was also in exile and unhappy about that.

But then the emperor and his three oldest sons are all in an airship crash. Maia must come to the capital city immediately and take the throne.

This book is the story of an 18-year-old young man with no training for leadership being suddenly exalted to the position of emperor. He must learn how to rule and how to navigate the court and the halls of power. As well as wanting to stay alive.

Maia doesn’t even know how to dance or ride a horse. Can he get himself crowned, investigate his father’s death, choose an empress, rule the country — and stay alive while he’s doing it?

Despite my original prejudices, this ended up being an absorbing and engaging story.

Find this review on Sonderbooks at: www.sonderbooks.com/Fiction/goblin_emperor.html

Source: This review is based on a book I got at ALA Annual Conference, signed by the author.