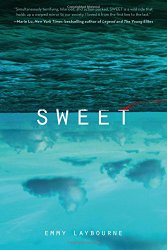 I feel like I shouldn’t have liked this book. But I was charmed by the two main characters and their sweet romance. Laurel has been invited to go on the cruise of a lifetime by her rich friend, Vivika. Tom was a child star who is now trying to shake his image as a tubby toddler who grew up in view of the world. He’s been hired as media host for this high budget cruise.

The cruise is to celebrate the invention of a new artificial sweetener, Solu. Besides being sweet, Solu sucks away fat. During the week-long cruise, before sales of Solu are allowed to the general public, the lucky (and wealthy) 500 guests on the ship are going to lose 5% of their weight.

Laurel is there primarily to support her friend. I love the explanation of why Laurel honestly feels good about her own body:

The messed-up thing is that Viv and I weigh around the same. I think we look fine. Like normal young women with curves in more or less the right places.

But Viv hates her body. And sometimes I can tell she thinks I should hate mine, too.

Maybe the reason Viv and I feel so different about our weight can be explained by our parents — or by the shape of our parents.

Viv’s dad is built like a fireplug. Short and fat. Exudes wealth, and perhaps because of that, he could care less about his weight. Viv’s mom? Even though she counts calories with a microscope, she’s still a wee bit oversize. She’s always wearing “foundation garments” and trying to get Viv and I to wear them. I think she might even wear Spanx to bed.

My dad? Regular height. Regular-dad beer belly. And my mom? Exactly like me. We’re both 5′ 7″. Both size fourteen. Ample breasts, belly, and rear.

So genetically, both Viv and I are set up to have the bodies we have.

But here’s the thing: My Dad loves the way my mom looks.

My mom will come home from a day at the bank with her hair frizzy, her suit jacket rumpled, her bust straining the buttons on her blue button-down shirt, and my dad will take her in his arms and gaze at her like she’s the most beautiful woman on earth. he thinks she’s sexy and perfect the way she is. (I know this because he tells her. Frequently. Often in public.)

So I know it’s possible.

It’s possible to find a guy who will find me attractive. I could even find one who finds the overflowing scoopfuls of me sexy and perfect.

Viv, on the other hand, has had to watch her dad grow steadily disgusted with her mom’s body over the years.

I like the way Tom, indeed, finds Laurel curvy and attractive.

How do they meet? Laurel throws up on his shoes.

As the cruise starts, Laurel gets horribly seasick — too sick to eat anything, let alone the Solu-laced desserts. Tom is trying to get rid of his baby fat, and is under a strict regimen with his trainer and best friend, Derek. Derek doesn’t want him to eat anything but “real food,” so Tom skips the Solu, as well.

The beginning of the cruise, when they run into each other and notice each other, is simply fun.

And that’s where I stopped believing the story, though it’s certainly a dramatic one. Supposedly, Solu can make fat disintegrate extremely rapidly. (Where does it go? Wouldn’t people at least have an elimination problem?) As well, it turns out to be the most addictive substance ever invented. I couldn’t quite believe that, either. I mean, with most addictive substances, the effect on different people varies. Surely, some could withstand its effects?

But not on this nightmare cruise. As you can imagine, when the Solu supply starts getting low, things start getting ugly. Very ugly. Oh, another thing I didn’t believe was that Solu addicts have a heightened sense of smell and can smell trace amounts of Solu — and will do anything to get it.

So, the story is one of survival for Laurel and Tom and the other people (mostly crewmen) who have managed to stay off Solu. What’s more, at midnight on the last scheduled day of the cruise, Solu is going to go on sale to the general public. And everyone thinks it’s safe….

I felt like it was just as well I didn’t really believe this book — because the things that happened as Solu took hold were nauseatingly horrifying. On top of that, some of the exploits that happen with a severe injury (I’ll say no more than that) were quite unbelievable to me, too.

So I didn’t quite believe what was happening, or even want to think about it much — but I still couldn’t stop reading, because I wanted to know what would happen to Laurel and Tom. Because, bottom line, I cared about them, because they were simply so sweet.

Find this review on Sonderbooks at: www.sonderbooks.com/Teens/sweet.html