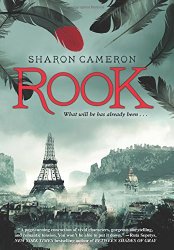 Like Across a Star Swept Sea, by Diana Peterfreund, Rook, by Sharon Cameron, is a science fiction retelling of Baroness Orczy’s The Scarlet Pimpernel. However, unlike Across a Star Swept Sea, Rook is not a scene-by-scene translation of the original, but more of a tribute, a situational equivalent. This meant that I did not know what was going to happen! The suspense and adventure and clever plotting (both on the part of the author and the characters) was all wonderfully done.

Now, neither of the tribute books keeps the identity of the Scarlet Pimpernel equivalent secret. In this book “The Red Rook” has been rescuing people from the Upper City of what once was Paris from prison in the Sunken City. She leaves behind a rook feather dipped in blood. She snatches people from execution by the Razor, as the Scarlet Pimpernel rescued victims from the guillotine, using disguises and cleverness.

But the Red Rook is a disguise that Sophia Bellamy of the Commonwealth begins to have difficulty maintaining. For the sake of money, she has become engaged to a Parisian who is cousin to the Ministre of Security, LeBlanc. LeBlanc comes to her engagement party and seems to be hot on her trail.

When her brother is arrested in her place and taken to the Sunken City for execution, Sophia must plan one last caper. And she needs to know: Can she trust her new fiancé? Or will he betray them all to save his own family’s fortunes?

This book is wonderfully written, with sizzling romantic tension, plots within plots, and plenty of narrow escapes. A fitting tribute to a great classic.

Find this review on Sonderbooks at: www.sonderbooks.com/Teens/rook.html