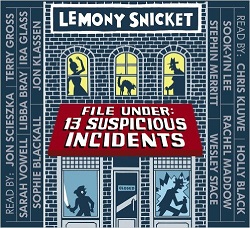 by Lemony Snicket
with various readers

This audiobook continues Lemony Snicket’s series All the Wrong Questions set in the strange deserted town of Stain’d-by-the-Sea. However, this is a side file to the case in the main series. Here are thirteen short mystery tales, some more bizarre than others. You don’t at all need to have read the original books – many of the characters are new. Some we’ve seen before, but knowing them ahead of time is not crucial to any of the short cases.

The audiobook has two flaws. The first is that there are 13 wonderful narrators, but it isn’t announced on the audiobook who is reading at any given time. I should have read the label on the CD before inserting it, but I wasn’t going to do that while driving in the car. All the narrators did a great job, but it would have been fun to know when I was listening to Jon Scieszka, Terry Gross, Sarah Vowell, Libba Bray, Ira Glass, Sophie Blackall, Jon Klassen, Chris Kluwe, Holly Black, Sook-Yin Lee, Rachel Maddow, Stephin Merritt, or Wesley Stace.

The other annoying thing is that the conclusions to each short mystery were all given at the end of the third audiobook. But before the conclusions are three stories. So there’s no way to check on the answer to a mystery right after finishing that mystery. If the conclusions had their own CD, I could have popped that in and listened to some conclusions before continuing on. Of course, in the print book, one could just check the back of the book after each mystery. As it turned out, the entire book wasn’t very long, so I found I could mostly remember what was involved in the story once I heard the conclusion. Honestly, there probably isn’t a good way to do this on audio CDs. I would have liked a separate CD for the conclusions – but that would add to the cost.

Other than that, these were totally fun mystery stories. They reminded me of Encyclopedia Brown – with a lot more variety, and a touch of silliness here and there. This would be a great one to suggest to kids who like mysteries, and they don’t need to read the longer 4-volume series, but I wouldn’t be surprised if they turn to that next.

Find this review on Sonderbooks at: www.sonderbooks.com/Childrens_Fiction/file_under_13_suspicious_incidents.html