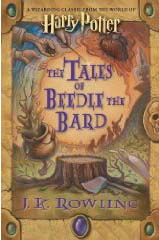 The Tales of Beedle the Bard

Translated from the Ancient Runes by Hermione Granger

J. K. Rowling is truly a master of mixing the light-hearted with the profound.  This book collects five original fairy tales.  They truly feel like folktales, with the twist that they are set in the Wizarding World created by J. K. Rowling.  She’s captured the simplicity and magic of folktales, with her signature touch of the bizarre.

I wasn’t crazy about the commentary by Dumbledore.  It felt a little like trying to drive home the moral too hard, and I get tired of hearing that Malfoys have been Muggle-haters for centuries.  However, there are some delightful and hilarious touches that made me laugh out loud.  For example, Dumbledore says that The Tale of the Three Brothers was the story he requested most often at bedtime as a child.  “This frequently led to arguments with my younger brother, Aberforth, whose favorite story was ‘Grumble the Grubby Goat.'”

Another example is where she tells about Beatrix Bloxam, who tried to turn the tales into something pure and precious.  “Mrs. Bloxam’s tale has met the same response from generations of Wizarding children:  uncontrollable retching, followed by an immediate demand to have the book taken from them and mashed into pulp.”

The proceeds from the sale of this book go to The Children’s High Level Group, which is one more reason to buy a copy of this delightful collection of tales.  I am going to try to talk my son into letting me read him the tales at bedtime.  You can’t outgrow these stories.