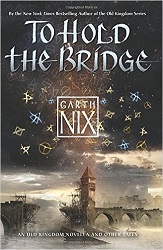 To Hold the Bridge

This is a collection of stories by the brilliant Garth Nix. Based on the copyright page, most were published previously, but not necessarily in the United States. (Garth Nix lives in Australia.)

They are uniformly well-written, but there is a tremendous variety of topics. The title story is set in the Old Kingdom world of Sabriel, Lirael, Abhorsen, Across the Wall, and Clariel. There are also stories set in the world of his other novels A Confusion of Princes and Shade’s Children.

But there are a wide variety of things going on here. His magic always was original. There is a dark twist in a lot of the tales, but this book makes for tremendously enjoyable reading.

I liked the story about the granddaughter of William the Conqueror and the Sword in the Stone. It turns out the magic of the Britons, holly and forest magic, conflicted with the iron magic of the Norman conquerors. This story is an example of Garth Nix’s complicated magical rules which he communicates to the reader through the eyes of his characters who already understand it. He never descends into expository hell, the bane of many fantasy writers. And he can even pull this off in short stories.

Besides revisiting his own worlds, he also goes into the worlds of The Martian Chronicles, by Edgar Rice Burroughs, Hellboy, and Sherlock Holmes — introducing his brother Sir Magnus Holmes, who is a specialist in occult magic. I especially liked the retelling of Rapunzel, where Rapunzel cleverly exploits the requirements of how a witch must treat a guest. Though the witch does some clever exploitation herself.

There are two vampire stories and a zombie story (which is also a unicorn story) and a story about a witches’ school (another one that’s especially good). I did mention there’s a wide variety in these tales. It took me a long time to read, because each story is so satisfying in itself, it’s easy to stop at the end of a story.

A magnificent collection by a master world-builder who also knows how to show you the hearts of his characters.

Find this review on Sonderbooks at: www.sonderbooks.com/Teens/to_hold_the_bridge.html