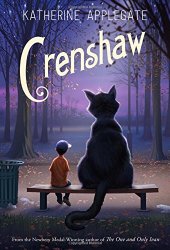 A kid starting fifth grade is not supposed to have an imaginary friend. When Jackson’s years-ago imaginary friend Crenshaw the giant cat shows up riding a surfboard and carrying an umbrella, Jackson’s afraid he’s going crazy.

Crenshaw first appeared in his life right after first grade when his family was homeless and lived in their minivan for fourteen weeks.

When they finally put together enough money, my parents moved us to Swanlake Village. It was about forty miles from our old house, which meant I had to start at a new school. I didn’t care at all. At least I was going back to school. A place where facts mattered and things made sense.

Instead of a house, we moved into a small, tired-looking apartment. It seemed like a palace to us. A place where you could be warm and dry and safe.

I started school late, but eventually I made new friends. I never told them about the time we were homeless. Not even Marisol. I just couldn’t.

If I never talked about it, I felt like it couldn’t ever happen again.

But now Jackson’s parents are selling almost everything they own in a garage sale. They’re talking quietly together about paying the rent. They try to joke about it and say everything will be okay. His little sister is scared, too. Then Crenshaw shows up, just like he did before, only bigger. He says he won’t leave until Jackson doesn’t need him.

But what kind of fifth grader needs an imaginary friend?
And does this mean they’re going to be homeless again?

This book by Newbery-winning author Katherine Applegate packs a punch. It shows the human side of homelessness. The family were told about shelters, but none of the homeless shelters in their town would allow husbands and wives to stay together.

Sometimes I just wanted to be treated like a grown-up. I wanted to hear the truth, even if it wasn’t a happy truth. I understood things. I knew way more than they thought I did.

But my parents were optimists. They looked at half a glass of water and figured it was half full, not half empty.

Not me. Scientists can’t afford to be optimists or pessimists. They just observe the world and see what it is. They look at a glass of water and measure 3.75 ounces or whatever, and that’s the end of the discussion.

This is a children’s book. It does have a relatively happy ending, without being too simplistic. Jackson does learn something from Crenshaw about being a friend, imaginary or not. I would have liked a little more, a little longer book – but I think this is all the better for child readers. Here’s a relatable character in a recognizable situation – but one we don’t usually talk about.

And on top of his family’s poverty, Jackson is dealing with a giant, flamboyant, imaginary cat.

Find this review on Sonderbooks at: www.sonderbooks.com/Childrens_Fiction/crenshaw.html