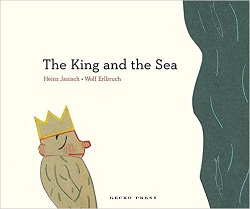 The King and the Sea

There’s something Zen about this book. The stories remind me of the child-like logic found in Winnie-the-Pooh.

As the title indicates, this book consists of 21 extremely short stories. All of them feature the king. A few feature the sea as well. Each story takes up one double-page spread with a very simple cut-paper illustration.

I think you’ll get the idea of the book if I quote a couple of the stories:

“I am the king!” said the king.
The sea answered with a whoosh.
“Hmm.” The king cocked his head thoughtfully.
“I see,” he murmured.
And he stood there quietly, listening to the waves.

“Why do you have to follow me around?” asked the king.
“To stop you from coming up with stupid ideas,” said the shadow.
“And to remind you there are two sides to every story.”
“So there are,” murmured the king, staring at the long dark shadow cast by his small gold crown.

“Buzz off,” said the king, shooing the bee from his flower.
“Don’t you know I’m the king?”
“And I’m the queen,” said the bee, stinging the king’s nose.

That gives you the idea. There’s something peaceful about reading these stories, which are silly, yet wise.

I don’t envision using these with a big group – they don’t provoke a big bang. However, these are perfect for one child – or one adult reading to one child – for a cozy, meditative reading experience. I can’t help but love the king.

Find this review on Sonderbooks at: www.sonderbooks.com/Picture_Books/king_and_the_sea.html