This morning I got up early and my son drove me to the airport — and we survived the experience! (It was his first time driving in months. I have a hard time not exclaiming aloud when in the passenger’s seat. Sometimes, I had to just close my eyes. This was mostly the backing out of the garage part.)

In the plane, I was seated next to another librarian. (Surprise, Surprise!) (We can pick each other out.) We had matching color carry-ons and coats. We were staying at the same hotel, so we navigated the subway together. We live in the same neighborhood, but she’s a cataloger for the Library of Congress. But it was a friendly way to start the conference!

I decided to spend the afternoon at the ALSC Notable Books Committee meeting. They were discussing picture books. While I was there, they discussed titles starting with F through M. Since I was just on the Cybils panel for Fiction Picture Books, I especially enjoyed it when committee members shared my enthusiasm for certain titles and my concerns for other titles. I won’t say which!

Then I went to catch the Booklist Author Forum, featuring Ken Burns, Terry Tempest Williams, and Mark Kurlansky. I walked in a little late, so didn’t get the intro, but their conversation was fascinating. The moderator was Donna Seaman.

When I walked in, they were talking about National Parks. Terry Tempest Williams’ new book is about that. Here are my notes:

Ken Burns: National Parks: We don’t have cathedrals, but look what we have.
You feel your atomic insignificance, but you’re made larger by that.
A wonderful thing that the parks do.

Terry: The Hour of Land, out in June.
Writing this book was a transcendent experience.
Not sure they’re our best idea. They’re an evolving idea. There’s a shadow side to our national parks.
Writing this book, she didn’t have anything to hide behind. Her vision has been too small.

Mark Kurlansky: His view of the living world (does both fiction and nonfiction). Much easier to write fiction and nonfiction at the same time than two of the same.
What they have in common is they have to be true.
Where do you get that truth?
In fiction — lots of self-searching and reflection. Often don’t turn out like you thought they would.
In nonfiction, the stories in real life are so great, you could never invent something that great.

Talk about bringing humor to complicated subjects:
Mark: Humor is what we live on. Tells his editors: “If it’s funny, I’m not going to cut it!”

Moderator: Terry, you bring beauty and sensuousness to your books. Is that a habit from journal-keeping?
Terry: Beauty is truth, truth is beauty for me. We’re witnessing terrible beauties. Like a swirling rainbow from an oil spill.
How she deals with this is she writes. It’s an act of consequence. Takes hard truths and attempts to recreate them on the page. That’s an act of beauty, of creation.
We are now at the Hour of Land.
Ultimately, the earth will survive us. Wanted the book to be an object of beauty. Photographs, but not feel-good images.

Ken: In Terry’s work, there’s an idea of presence. Youu force me back into this moment, which is a great gift.

Moderator: I think of your work, Ken, as slowing down time.
Ken: In a book, the author has no control over how long you spend with it. He tries to ask for your attention at that moment.
In film you have a little more power to control the moment.
Humor is an important glue in his war films. And helps bridge the gap to different times.
We think because we’re here we know a lot more than folks a hundred years ago.

Moderator: Mark’s forthcoming book is about paper. A uniquely human trait is that people record.
Mark: The history of humans is the story of trying to service this urge to tell stories. Search for more and more efficient ways of writing… and it goes on. We want to tell our stories. We want to pass our experiences on. That will continue as long as we’re around.
Every new idea is confronted with the same objections. Plato said that learning by reading isn’t true knowledge.

Terry: I have a disease with journals. It’s not real unless I hand write it down. Goes through a journal a month. She’s witnessing on the page.
Her journal is her personal library of experience. She feels like she lives twice. Uses them as reference points when she’s writing. Wow. Told about an amazing experience she saw with bison in Yellowstone. Had to get it down in writing right away.
In the act of writing it, it becomes you.

Ken: I write everything out by hand. It doesn’t seem as real without writing it out.
“beautifully pathetic grasp at immortality.” Stories are a way to try to live on.
A seemingly chhaotic world– story puts order into our lives. It keeps us from perceiving our mortality. A wonderful kind of distraction. Writing down things makes sense of it.

Mark: I sometimes think that we talk too much.
With writing, you’re alone with your thoughts and there’s not a lot of talking.
At a Benedictine monastery, the silence keeps the effect of beautiful music.

Moderator: Thinking about distillation. Each of you deal with huge topics. How painful is it to edit it down?

Terry: Out of 400 national parks, focused on 12, and in 30 seconds, each park is its own universse. Was paralyzing. Had to come to grips with her own limitations. The only way to go foorward was to say, “I’m a storyteller.” and approach it that way. You can deal with the world that way.

Ken: It takes 40 gallons of sap to make 1 gallon of maple syrup. Exactly like making a film.
Shooting ratio of easily 40 to 1.
Began to understand this is not dissimilar to sculpture. What’s on the floor of the studio is not part 2. It’s the negative space. In order to be a there, there has to be a not-there.
Doesn’t like Director’s Cut or extras on DVDs.

Terry — after she was interviewed by Ken Burns for 4 hours, she cried like never before. It was that outpouring of emotion that made her realize she had to write about it.

Mark: It’s painful to get research into a manuscript. He blows a conch shell when he’s done with that part.

Mark: Then he cuts it and pares it. It’s his favorite part, doing that paring.

Terry: And then you have to return to your family.

Moderator: Tales from the front?
Mark: I love research, and do it myself. Research is learning. It’s exciting and fun and why I do the kind of books I do.
There’s no substitute for a personal experience. Doing the salt book, he went to the site of Carthage — and understood the Roman empire in a way I never have before.
“You have to go places and see things, and when possible talk to people.”

Ken: All history, all biography is failure. Think of the people closest to you and how inscrutable they remain. But we have to try. You can’t farm out the research.
Terry: when she went to Rwanda, she made a pilgrimage to the Library of Congress and looked at all the maps of Rwanda she could find.
One of most powerful things has been curating the photographs.
Researching the images changed her perception of what a park was.

Moderator: Their energy level went up when they started talking about research!

What sticks in Ken’s mind about the Civil War is that Winchester, VA, changed hands 72 times.

Terry: Those details! Was wondering if there were prairie dogs in Gunnison County — found out in a museum.

Ken: In publishing, we’re results-oriented. Research is about practice. What it’s about, really.
He’s exhilarated that it’s the process.
The second it’s done, it’s yours, not mine. What’s mine is the process.

Mark: I know so much more about writing now. Writing is about the only thing you get better at with age.

Moderator: “Collaboration is the only way forward.” What do you mean by collaboration?
Terry: This converstaion is a collaboration. Books are a collaboration with the reader and those who take your words seriously.
It’s especially important for writers because our tendency is solitude. Seeing the world from all these different angles as we become more and more complex. In that prism we see the beauty of the spectrum.

***
After the talk, we were given books or parts of books by all three authors and they signed them. With Ken Burns, it was pages from his book Grover Cleveland, Again! With Terry Tempest Williams, it was a nice chapbook with the chapter on Grand Tetons National Park from her upcoming book The Hour of Land. With Mark Kurlansky, it was an Advance Reader Copy of his upcoming book Paper. I definitely want to read all three! (And I got about halfway through the chapbook while standing in line for the other two. This is good writing!)

Then came the exhibits!

You know how medieval soldiers used to go berserk? There is a Book Frenzy which takes hold of a normally mild-mannered librarian on Opening Night of ALA, which I believe is similar.

I tried to thwart it a little bit by not participating in the Running of the Librarians when the ribbon is cut and the exhibits open. Instead I waited in line for the signed books.

However, I did collect 30 more books, 3 tote bags, and a hungry tomato.

And the Post Office on the Exhibit Floor isn’t open on Friday night, so I inevitably spend the rest of the conference figuring out where I will tote all those books to ship them home. There is a UPS store across the street from my hotel…. 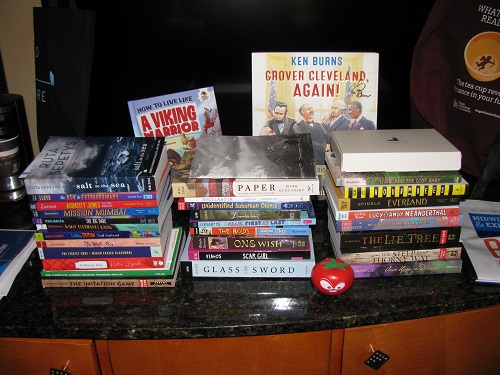