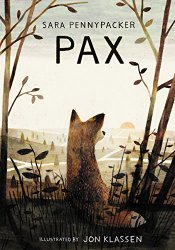 At ALA Midwinter Meeting, this Advance Reader’s Edition came in a special gift box, which opens up to a diorama.

When you open the first lid of the box, you see a blurb from librarian and blogger Betsy Bird, and next, one from librarian John Schumacher, and only after that from Newbery author Katherine Applegate. It made me happy to see bloggers featured so prominently (and there are more people I know blurbing the book on the back cover).

Then I read the book itself — and what they say is true. I was pulled in to this book, and finished it by the next day. Even though I have this ARC, I’ve already pre-ordered my own published copy — this edition didn’t have very much of the art by Jon Klassen, which I know will be wonderful, and whose stark artwork is exactly suited to this material.

The book alternates viewpoints between Pax, a fox, and Peter, his boy.

Peter has been raising Pax since he found the orphaned fox kit, not long after Peter’s mother had died. But now, five years later, Peter’s father has enlisted to fight in the war, and he says it’s time for Peter to return Pax to the wild. And Peter is going to have to live with his grandfather three hundred miles away.

The book opens as Peter leaves Pax in the woods. Pax doesn’t understand.

The boy’s anxiety surprised the fox. The few times they had traveled in the car before, the boy had been calm or even excited. The fox nudged his muzzle into the glove’s webbing, although he hated the leather smell. His boy always laughed when he did this. He would close the glove around his pet’s head, play-wrestling, and in this way the fox would distract him.

But today the boy lifted his pet and buried his face in the fox’s white ruff, pressing hard.

It was then that the fox realized his boy was crying. He twisted around to study his face to be sure. Yes, crying — although without a sound, something the fox had never known him to do. The boy hadn’t shed tears for a very long time, but the fox remembered: always before he had cried out, as if to demand that attention be paid to the curious occurrence of salty water streaming from his eyes.

The fox licked at the tears and then grew more confused. There was no scent of blood. He squirmed out of the boy’s arms to inspect his human more carefully, alarmed that he could have failed to notice an injury, although his sense of smell was never wrong. No, no blood; not even the under-skin pooling of a bruise or the marrow leak of a cracked bone, which had happened once.

It doesn’t take Peter long at his grandfather’s house for him to know that he is in the wrong place. He needs to go back and find Pax and take him home. He knows that Pax will wait for him.

But it’s not simple for a boy to travel three hundred miles. The book follows Peter and Pax in alternating chapters as they try to find one another.

The war is coming to the place where Pax was left. The house where they lived is in an evacuation zone. The soldiers are wiring traps at the river, without regard for animals. So besides Pax having to learn to live in the wild, he is affected by what the humans are doing. The other foxes don’t trust him because he smells like humans.

Peter also meets someone on his journey who’s been deeply affected by war. Circumstances force him to slow down and learn some lessons while he’s waiting to travel on, even though he so urgently wants to get to Pax.

This story is an intricate, well-orchestrated look inside the characters, both human and animal. The title is appropriate, because it’s also a look at war and peace.

After I finished the book and was mulling it over (This is a book that you will mull over.), I wondered where it was set. Certain clues — Peter’s love for baseball and the woman he meets having Creole heritage — would indicate this is the United States. But the animals knew about war and had seen war in their lifetimes.

An old fox (who has seen war) explains:

There is a disease that strikes foxes sometimes. It causes them to abandon their ways, to attack strangers. War is a human sickness like this.

Anyway, I was wondering how this could be America, since this doesn’t happen here. Then I noticed the sentence on a page at the very front of the book:

I’m looking forward to reading this again with Jon Klassen’s illustrations. Publication date is today! Yes, this, the first new book I read in 2016 is already what I hope wins the Newbery in 2017. We’ll see….

Find this review on Sonderbooks at: www.sonderbooks.com/Childrens_Fiction/pax.html

Source: This review is based on an Advance Reader’s Copy I got at ALA Midwinter Meeting.