After the Youth Media Awards on Monday morning, I checked out of my hotel and returned to the convention center for the Morris Awards and YALSA Excellence in Nonfiction Awards.

These are always a delight. The Morris Award goes to a debut author, and all the Finalists speak. They are always so thrilled even to be published, to be honored on top of that is wonderfully affirming. And the Nonfiction Awards inevitably have some incredibly intelligent people talking about interesting things.

First up were the Morris Award Finalists.

Kelly Loy Gilbert, author of Conviction, wasn’t able to be there, so she gave a video speech.

Books are about connections in unlikely places.
She was a library lover and spent her whole childhood living other lives through books.
Her book asks Who are you when nothing in the world is like you believed?
All stories are redemption stories.
We’re forced to confront our shared humanity.

The next speaker was Anna-Maria McLemore, author of The Weight of Feathers. 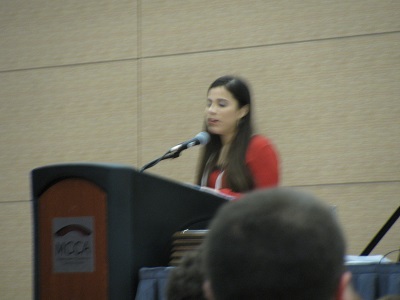 It was at an ALA conference that she first found her voice about being a queer Latina author.
When she was a teen, she fell in love with a transgender boy.
She was taught to hate who she was. The boy she loved helped her get beyond that.
In her book, when her character sees the boy, she sees her own otherness as well.
Stories make us human to each other.
Each one of us is in 400 stories. (400 was her childhood word for infinity.)
Before librarians put books in her hands about Latina girls, she was disappearing.

Then came Stephanie Oakes, author of The Sacred Lives of Minnow Bly.

(Some authors did not hold still enough while they talked to get their picture!)

Her character Minnow Bly spent her life in a cult. Now she doesn’t have hands, and she’s in Juvie.
She never learned to read in the cult, but in Juvie, a teacher and a librarian teach her to read.
The author became silent after a childhood hurt.
She found reading at 12 years old, when she was handed Harry Potter and the Sorcerer’s Stone.
She gathered and hoarded words.
Books put things into words she hadn’t known she believed.
Writing is like screaming at the top of your voice: “I exist! I exist!”
Librarians made a difference in her life.

Leah Thomas, author of Because You’ll Never Meet Me, was next.

There was an unspoken Voldemort rule about her high school librarian. She was “The Mean One.”
Leah found out that “The Mean One” was actually “The Cool One.”
Proximity has no relationship to distance.
Sometimes fiction is the only escape we get.
The power of words is tremendous.
Librarians destroy distance with every interaction.
Words are the death of distance.

Finally, the winner of the 2016 Morris Award, Becky Albertalli, author of Simon vs. the Homo Sapiens Agenda spoke. 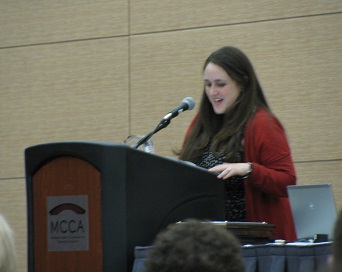 She has a three-year-old at home, who thought the sticker on her book would be a train sticker. Not even Thomas the Tank Engine on the cover of her book could top this!
She decided to write when she had a baby and quit her job. Don’t throw away your shot!
She was more honest in this book than ever before — because she didn’t really believe it would get published.
Books saved her as a lonely, wistful teen.
Publishing a book is the fastest way to find your soulmates.
Her book isn’t epic, it’s life-size.
It’s her husband’s grandfather’s senior citizen book club pick.
Who made the rule that every librarian has to be awesome?
They care about connecting readers to books.

Next came the Finalists for the YALSA Excellence in Nonfiction Award.

First up was M. T. Anderson for Symphony for the City of the Dead. 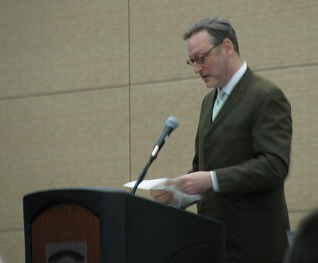 It’s about Shostakovich’s symphony, which was smuggled around the world. By the 1950s, the addressees’ names were removed — a suppression of truth in our society, too.
If Communism has amnesia, Capitalism has ADHD.
Capitalism also hides history, as Communism did.
Nonfiction is about revealing what’s hidden.
No child thinks asking questions is boring.
It takes adults to convince people that learning about this fascinating world is boring.
Librarians take kids to the window and say, “See this reality? It’s yours!”

Margarita Engle spoke next about Enchanted Air, her memoir in verse. 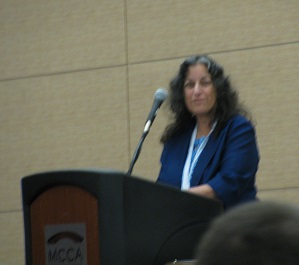 Her book is pure emotion — emotions are facts, too.
This allowed her to communicate directly with readers.
Poetry makes her happy.
Beautiful language was the only way she could handle excruciating memories.
Last year, she dedicated the book to 10 million stateless people. Now there are 50 million.
She felt like an invisible twin was left behind.
This book is for any reader who feels divided, half belonging, half shunned.
The overriding message is hope.

Then Tim Grove spoke about First Flight Around the World.

He works at the National Air and Space Museum. The Chicago is there — one of the first two planes to fly around the world.
The museum’s archives had a handwritten journal of one of the pilots, along with photographs.
They flew over many countries. It was a race! In 1924, there was no guarantee that anyone would make it.
4 planes left, and only 2 returned. But there were no fatalities.
The planes were named New Orleans, Seattle, Chicago, and Boston.
He used journal excerpts as sidebars.
They tried to get the book printed in China, but China wouldn’t let them print the 1922 map!

Next was Nancy Plain speaking about This Strange Wilderness: The Life and Art of John James Audubon. 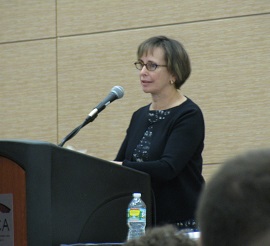 Audubon’s story includes Art, American History, and the Lives and Ways of Animals (3 things she loves very much).
Audubon was an incredible bird artist and water colorist.
He created a magnificent collection of paintings of 400 species of American birds.
His goal was to seek out all the wondrous things hidden since creation.
He was also the founder of modern ornithology and the first to band the legs of birds.
He was an over-the-top guy, stranger than fiction.
He was born in Haiti, raised in France, and saw the French Revolution. He came to America in 1803.
He had a country store on the Kentucky Frontier which went bankrupt, and he was thrown in jail for debt.
That’s when he decided to paint all the birds of America. He set out into the wilderness.
He had trouble finding an American publisher, so he went to Europe. He found a publisher — and fame — there.
He had an important legacy.
He predicted the extinction of the passenger pigeon and the near extinction of buffalo.
Audubon is an inspiration and invitation to protect and preserve our wildlife.

Finally, the 2016 winner of the YALSA Award for Excellence in Nonfiction spoke, Steve Sheinkin for Most Dangerous: Daniel Ellsberg and the Secret History of the Vietnam War.

There’s always one thing that grabs him. This time it was a filing cabinet with a dent in it.
The cabinet belonged to a psychiatrist in Los Angeles. Two secret agents from the white house broke into the office to get damaging information about Daniel Ellsberg.
This story cooperated.
Daniel Ellsberg started out incredibly not dangerous, a skinny, nerdy kid.
He walked into the Pentagon as a new analyst right before the Gulf of Tonkin.
The author was able to talk with Daniel Ellsberg, he’s still alive.
He saw the government telling lies and was faced with an agonizing decision whether to expose that or not.
Steve Sheinkin uses the library as a second home.
We’re allies! (Writers and librarians) We’re all doing the same thing!

After those inspiring words, we were given a chance to get books signed by the authors. As long as I had four books, I decided to visit the exhibits one last time and get enough to fill a box and ship them all home. 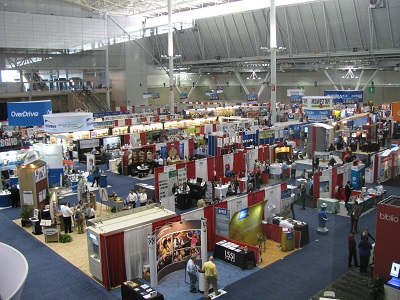 Then my plan was to roam around Boston before my evening flight. Looks like a lovely day, right? It was the first we’d seen of the sun all weekend. 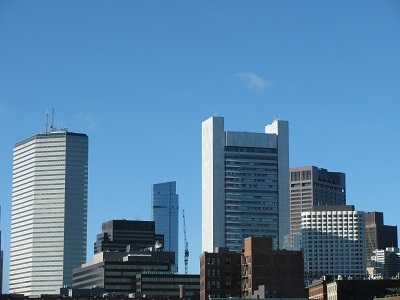 But it turned out to be bitter cold! So I ended up seeing an IMAX film at the Aquarium. And I got to the airport early enough to have a sit-down dinner right by my gate. And I had a lovely flight home, reading.

Within a couple of days, 101 books arrived for me, which happens to be the exact number I sent home from ALA Midwinter Meeting last year! 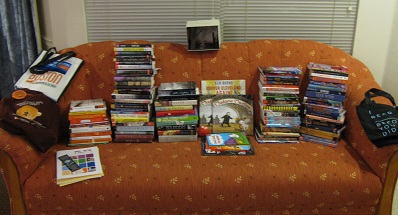 Total spent on books: $10 for two signed copies of Madame Martine for my nieces.
Postage: I didn’t add up exactly, but it was approximately $100.

Distribution:
55 children’s books
30 teen books
16 Adult books
3 tote bags
1 hungry tomato (Or a very angry Bob the Tomato?)
1 diorama
15 books signed by the author
Oh, and only 1 duplicate — and it’s a children’s book, so will be a prize anyway.

What a lovely conference!