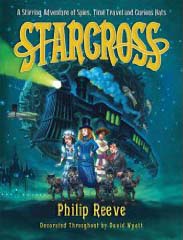 Starcross is a worthy successor to Larklight, another rip-roaring adventure of Art and Myrtle Mumby in the outer reaches of the galaxy.  Once again, we’re in alternate-reality 1851, where space travel has been discovered through alchemy, and the British Empire rules the ether (rather than the waves).  It turns out that there is all kinds of life out there in the solar system, and the British Empire has outposts among the natives on every planet.

At the start of this book, the Mumbys, with their mother, are invited to Starcross, a sea-resort hotel on an asteroid which has never been known to have any water.  Sure enough, the “tide” comes in every twelve hours, and the dry sea bed fills up with water as if it has always been there.

Obviously, something strange is going on at Starcross.  And what about the top hat in Art’s closet that seems to be calling out to him to put it on?  Or the strange shadow across the balcony and the little voice saying “Moob”?

Sure enough, the adventures involve international intrigue, mortal danger, and this time even time travel.  Once again, I lost track of how many times their lives were in peril.

Listening to these books on CD makes them all the more fun.  These would make excellent family listening, as it will appeal to all ages.  The narrator does an excellent job giving each character a distinct voice.  The way Art and Myrtle pick at each other seems completely realistic for a brother and sister and is just one of the amusing touches the books are packed with.

You do not have to read (or listen) to Larklight in order to enjoy Starcross, but why would you want to miss it?  Almost all our old friends from the first book show up in this one, and add to the fun.

Here’s a light-hearted adventure story by a writer with a wild imagination and a delightful sense of humor.  We’ve got space travel and pirates and spies and aliens and mind control and time travel and speeding space trains and proper ladies and British soldiers and a sinister plot to take over the solar system.  What more could you want?  Huzzah!