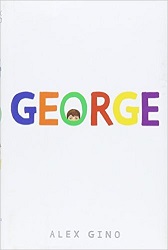 The story is simple and well-told. The narration talks about George as “she,” but the people around her treat her as male and assume that she is male, even when they’re trying to be supportive and encouraging.

At the start of the book, George’s teacher is finishing reading Charlotte’s Web to the class, and George can’t keep from crying when Charlotte dies – which of course attracts jeers from boys in the class, including one boy who used to be George’s friend.

George’s teacher tries to be supportive.

“It takes a special person to cry over a book. It shows compassion as well as imagination.” Ms. Udell patted George’s shoulder. “Don’t ever lose that, George, and I know you’ll turn into a fine young man.”

The word man hit like a pile of rocks falling on George’s skull. It was a hundred times worse than boy, and she couldn’t breathe. She bit her lip fiercely and felt fresh tears pounding against her eyes. She put her head down on her desk and wished she were invisible.

George’s class is going to perform a play of Charlotte’s Web. George wants with all her heart to be Charlotte, but is told that there are too many girls who want the part.

This book helped me get inside the head of someone who is figuring out who she really is. And showed me just how difficult that would be – to understand, and then to try to tell the people around you.

This is a children’s book about what it feels like to be transgender. Wow. Perhaps it will help some transgender kids feel less alone. But maybe even more important, perhaps it will help other kids experience empathy, which is one of the best antidotes to bullying. It would be harder to mock someone for being transgender after you’ve read about George just wanting to be who she is.

And it’s also a great story about a kid who wants to surprise everyone by really shining in her class play.

Find this review on Sonderbooks at: www.sonderbooks.com/Childrens_Fiction/george.html