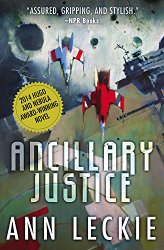 My son gave me Ancillary Justice for Christmas because it was the best book he read in 2015. I read it on my trip to ALA Annual Conference in Boston, and it was amazing.

The body lay naked and facedown, a deathly gray, spatters of blood staining the snow around it. It was minus fifteen degrees Celsius and a storm had passed just hours before. The snow stretched smooth in the wan sunrise, only a few tracks leading into a nearby ice-block building. A tavern. Or what passed for a tavern in this town.

There was something itchingly familiar about that out-thrown arm, the line from shoulder down to hip. But it was hardly possible I knew this person. I didn’t know anyone here. This was the icy back end of a cold and isolated planet, as far from Radchaai ideas of civilization as it was possible to be. I was only here, on this planet, in this town, because I had urgent business of my own. Bodies in the street were none of my concern.

Sometimes I don’t know why I do the things I do. Even after all this time it’s still a new thing for me not to know, not to have orders to follow from one moment to the next. So I can’t explain to you why I stopped and with one foot lifted the naked shoulder so I could see the person’s face.

Frozen, bruised, and bloody as she was, I knew her. Her name was Seivarden Vendaai, and a long time ago she had been one of my officers, a young lieutenant, eventually promoted to her own command, another ship. I had thought her a thousand years dead, but she was, undeniably, here. I crouched down and felt for a pulse, for the faintest stir of breath.

Seivarden Vendaai was no concern of mine anymore, wasn’t my responsibility. And she had never been one of my favorite officers. I had obeyed her orders, of course, and she had never abused any ancillaries, never harmed any of my segments (as the occasional officer did). I had no reason to think badly of her. On the contrary, her manners were those of an educated, well-bred person of good family. Not toward me, of course — I wasn’t a person, I was a piece of equipment, a part of the ship. But I had never particularly cared for her.

Reading the beginning over, it’s clear I need to read the whole book over, the better to appreciate certain details which were there all along. The world-building in this book is incredible, though now that I understand all of it, I think I’d appreciate the book even more.

The person talking was once a ship, or at least the AI controlling a ship. She had many bodies, ancillaries, taken from captured peoples and connected up to the AI. In her memories, she saw events from many different perspectives.

But something terrible happened, the ship was destroyed, and Breq’s current body is the only body left. She is now on a mission for vengeance — vengeance against one who also has multiple bodies.

We find out all this along the way. Meanwhile, Breq cares for and rehabilitates Seivarden, who was her officer more than a thousand years ago, and has some catching up to do.

This book is mind-blowing with the situations and ways of looking at the world.

Another thing I liked was the things the author does with gender. On this icy planet where the book opens, Breq is trying to figure out how to address someone.

She was probably male, to judge from the angular mazelike patterns quilting her shirt. I wasn’t entirely certain. It wouldn’t have mattered, if I had been in Radch space. Radchaai don’t care much about gender, and the language they speak — my own first language — doesn’t mark gender in any way. This language we were speaking now did, and I could make trouble for myself if I used the wrong forms. It didn’t help that cues meant to distinguish gender changed from place to place, sometimes radically, and rarely made much sense to me.

With the Radch language not marking gender, the author, seeing through Breq’s eyes, uses “she” as the default. For everyone. This is a refreshing change. I thought it was interesting that I didn’t necessarily adjust well to this, thinking of everyone as female. When I later found myself wondering which sex organs different people had — when it didn’t matter in the slightest — it dawned on me how much I see the world through gender lenses. It was interesting to look at the world a different way through the eyes of someone who was once a ship.

And besides doing amazing things with perception, this book tells a compelling story. We’ve got the whole history of how most of Breq was destroyed and what she is trying to do now. And how almost-dead Seivarden fits into that.

This is a fascinating and absorbing book. If you like science fiction at all, and if you like having your perceptions and assumptions stretched, give this one a try.

Find this review on Sonderbooks at: www.sonderbooks.com/Fiction/ancillary_justice.html

Source: This review is based on my own copy, given to me by my son.