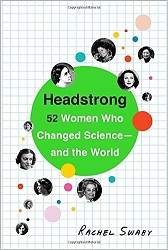 52 Women Who Changed Science – and the World

Quick, name a scientist who was female and who changed the world with her work. Most people think of Marie Curie and draw a blank when they try to come up with any further names. Rachel Swaby specifically left out Marie Curie from this book. But she found 52 other women who did world-changing scientific work.

I heard Rachel Swaby speak at the 2015 National Book Festival. She was wonderful, so delighted and intrigued by the stories she’d uncovered about these amazing women. I checked out the book and since then have been reading one chapter a day. The fifty-two chapters are an easily digestible 3-4 pages, but highlight the way these women changed the world.

The author chose women who are already dead (“whose life’s work has already been completed”) and she leaned toward women who overcame obstacles, so these stories are inspiring as well as informative. She includes women who worked in the fields of medicine, biology, genetics, physics, geometry, astronomy, math, technology, and invention.

The Introduction explains why this book is so needed:

This book about scientists began with beef stroganoff. According to the New York Times, Yvonne Brill made a mean one. In an obituary published in March 2013, Brill was honored with the title “world’s best mom” because she “followed her husband from job to job and took eight years off from work to raise three children.” Only after a loud, public outcry did the Times amend the article so it would begin with the contribution that earned Brill a featured spot in the paper of record in the first place: “She was a brilliant rocket scientist.” Oh right. That.

The error – stroganoff before science; domesticity before personal achievement – is so cringe-worthy because it’s a common one. In 1964, when Dorothy Crowfoot Hodgkin won the greatest award that chemistry has to offer, a newspaper declared “Nobel Prize for British Wife,” as if she had stumbled upon the complex structures of biochemical substances while matching her husband’s socks. We simply don’t speak of men in science this way. Their marital status isn’t considered necessary context in a biochemical breakthrough. Employment as an important aerospace engineer is not the big surprise hiding behind a warm plate of noodles. For men, scientific accomplishments are accepted as something naturally within their grasp. . . .

We need not only fairer coverage of women in science, but more of it. . . .

As girls in science look around for role models, they shouldn’t have to dig around to find them. By treating women in science like scientists instead of anomalies or wives who moonlight in the lab as well as correcting the cues given to girls at a young age about what they’re good at and what they’re supposed to like, we can accelerate the growth of a new generation of chemists, archeologists, and cardiologists while also revealing a hidden history of the world.

By her own standards, Hertha Ayrton was a good scientist. So was the detail-oriented seismologist Inge Lehmann, and the firecracker neuroembryologist Rita Levi-Montalcini, too. The scientists in this book aren’t included because they were women practicing science or math in a time when few women did – although by that criterion, many would fit. They’re included because they discovered Earth’s inner core, revealed radioactive elements, dusted off a complete dinosaur skeleton, or launched a new field of scientific inquiry. Their ideas, discoveries, and insights made earth-shaking changes to the way we see the world (and that goes for the seismologist, too). . . .

So instead of calling every standout woman in science the Marie Curie of her field, the next time someone really lives for their work, let’s call them the Barbara McClintock of their specialty. If a scientist charts new territory, let’s refer to them as the Annie Jump Cannon of their particular exploration. If a researcher puts herself in physical danger for an experiment, let’s say she’s like any number of the scientists here who worked with radioactivity or mustard gas.

There are fifty-two profiles in this book. Read one a week, and in a year you’ll know whose research jump-started the Environmental Protection Agency, who discovered wrinkle-free cotton, and even whose ingenious score has now saved generations of struggling newborns. So little coverage has been dedicated to these scientists elsewhere that, in going through these profiles, I hope you’ll feel like you’ve gained a breadth of knowledge that rivals that of Salome Waelsch.

This book hit home to me because I was one of a small minority of women in a graduate mathematics department in the 1980s. It would have done me good to know that outstanding scientists and mathematicians who were women were nothing new at all.

And the book is interesting, too! Each brief biography begins with an intriguing paragraph and then gives you the rest of the story about these women who indeed overcame challenges and accomplished great things.

This book would be a fantastic place to start for novelists looking for actual historical characters with fascinating lives. I say this because I’ve already read a wonderful novel about one of the featured scientists, Sophie Kowalevski, Beyond the Limit, by Joan Spicci. I’m left wanting to know more about most of these amazing women.

Here are a few introductory paragraphs to get you intrigued:

Maria Sibylla Merian loved bugs long before scientists had uncovered their mysteries, loved them at a time when few people were interested in those vile, disgusting things. Acquantances assigned credit or blame for her unusual passion to her mother, who had looked at a collection of insects while Merian was still in the womb. Something about those pinned and polished bodies, shimmering powdery wings, and articulated legs instilled a fascination in the child growing inside her.

Two members of the division of war research at Columbia University spent an entire day grilling Chien-Shiung Wu about her work in nuclear physics. Regarding their own top-secret projects, the interviewers remained dutifully mum until the very end of the day, when they asked if Wu had any idea what they were up to. She cracked a smile. “I’m sorry, but if you wanted me not to know what you’re doing, you should have cleaned the blackboards.” They asked her to start work the next morning.

During the last two and a half decades of her 103 years, Italians liked to joke that everyone would recognize the pope, so long as he appeared with Rita Levi-Montalcini. Though she stood only five feet, three inches, the stories of her work and her life were as large and dramatic as her iconic sideswept hair.

Alice Hamilton’s professional successes – of which there were many – fell at the intersection of science and social issues. Although she earned a degree in medicine from the University of Michigan, gaining further training in bacteriology and pathology at the University of Leipzig and the University of Munich, she didn’t think herself capable of becoming anything more than a “fourth-rate bacteriologist.” But what she lacked in bravado, she made up for in her dedication to problems both “human and practical”: typhoid outbreaks, lead poisoning, and the widespread horror of occupational disease.

Learn the fascinating stories of these and forty-eight other women and along the way become better informed about history and better understand how capable women are and have long been at being scientists.

Find this review on Sonderbooks at: www.sonderbooks.com/Nonfiction/headstrong.html