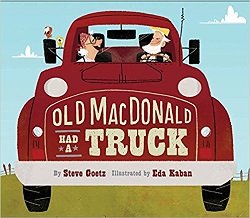 Old MacDonald Had a Truck

Okay, it’s an idea that had to happen. Old MacDonald’s making a stunt track on his farm! We’ve got the familiar song, but this time, on his farm he has:

an excavator,
a front loader,
a bulldozer,
a motor grader,
a dump truck,
a steamroller,
a cement mixer,
and a truck (racing on the finished track).

The various machines work with various noises like a Dig Dig, a Scooop Scoop, a Puuush Push, a Scrape Rake, a Dump Thump, a Squish Smash.

There’s no accumulation, though, so I’m thinking if I used it for storytime, I might repeat each machine page to give kids the chance to join in. Though after the sound effects page for each machine, the line at the end of the verse shows up on the next page (Old MacDonald had a farm E-I-E-I-O.), leading right into the next verse. So it’s going to be a little disrupting to go back and repeat.

I think, though, for reading to your own child on a lap, they’re going to ask for this over and over again, and on only the second or third time through, they’ll be confidently joining in. Parents and grandparents in that situation won’t need to repeat any pages, since they’ll be repeating the whole book!

One other thing I wonder: Farm animals are helping Old MacDonald and his wife build the stunt track. Why, though, is a fox joining in? I would have rather they stuck with more traditional animals for Old MacDonald’s farm. But that’s a minor quibble and doesn’t diminish the fun.

I like what the flap says about the author: “Steve Goetz was inspired to write his debut picture book when his son, Connor, began to sing ‘Old MacDonald Had a Farm’ with alternative lyrics (‘Old MacDonald had a Monster Truck, E – I – E – I – Ooooooo’). This moment blossomed into an ongoing conversation about the heavy machinery Old MacDonald must have owned to run his farm.” Indeed!

This is the sort of book that makes me wonder why anyone didn’t think of this before. In fact, surely someone has? But this one is carried out with exuberance.

Find this review on Sonderbooks at: www.sonderbooks.com/Picture_Books/old_macdonald_had_a_truck.html