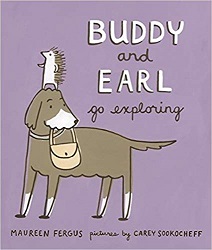 Buddy and Earl Go Exploring is a picture book in the grand tradition of animals-don’t-understand-human-things-with-hilarious-results such as Minerva Louise, The Adventures of Cow, and Paul Meets Bernadette. The child hearing this story will delight in being smarter than the animals.

In this case, we have a dog named Buddy, who is a little more savvy about human things, and an adventurous hedgehog named Earl. Earl is new to the family.

One night, Earl announces he’s going on a trip and travels for some time on his hamster wheel.

After a long time, he stopped and looked around.

“This place looks eerily similar to the place I just left,” whispered Earl.

“Maybe that is because it is the place you just left,” whispered Buddy.

When he heard Buddy’s voice, Earl was so startled that he jumped and made a funny popping sound.

“I ran faster than the wind!” he cried. “How did you manage to keep up with me, Buddy?”

“I am not sure,” said Buddy uncertainly.
“Well, I’m glad you’re here,” declared Earl. “Exploring is always more fun if you do it with a friend.”

As they explore this place (the kitchen), first Earl sees a silvery lake in the shadow of a great mountain. Buddy knows it’s his water dish in the shadow of the garbage pail, but he gets carried away in Earl’s enthusiasm. When he knocks over the garbage can, at first he feels terrible.

Then he noticed some of yesterday’s meatloaf and forgot all about feeling terrible.

Next, Earl sees a lovely lady hedgehog trapped in the jaws of a monster. Buddy knows it’s Mom’s hairbrush in her purse, but soon is convinced to help Earl save his friend.

Then they have an encounter with the vacuum cleaner before settling down for the night. The last picture shows the two happily asleep – with the results of their exploring strewn all around the kitchen, and Dad’s foot coming into the kitchen the next morning.

The story is simple enough, but the characters make it wonderful – with Earl’s wild imagination, and Buddy’s simple friendly doggy enthusiasm. Kids will enjoy being in the know and delight in the good-hearted adventures of these two friends.

Find this review on Sonderbooks at: www.sonderbooks.com/Picture_Books/buddy_and_earl_go_exploring.html