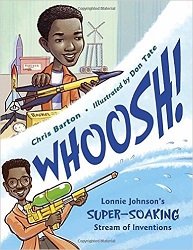 Lonnie Johnson’s story is as inspiring as you might imagine. He played with rockets as a kid and won first place in a science fair at the University of Alabama with a homemade robot in 1968, the first year that African-Americans were even allowed to participate. He worked for NASA on the Galileo probe.

The idea for the Super Soaker water gun came by accident when Lonnie was working on a cooling system using water and air pressure. That particular accident makes an amusing illustration. But even when he’d thought how to apply the ideas to a water gun and created a prototype, he met with obstacles in trying to get a company to produce his invention.

When he finally did get a meeting, there’s another fun illustration, with a special fold-out page, demonstrating the Super Soaker.

Best of all, Lonnie Johnson isn’t finished yet. Yes, he made profits at last from his invention. Here’s how the book ends:

So what did Lonnie do?

He got a bigger workshop, which is where you’ll find him today. Because facing challenges, solving problems, and building things are what Lonnie Johnson loves to do. And his ideas just keep on flowing.

May this book inspire more kids to be inventors!

Find this review on Sonderbooks at: www.sonderbooks.com/Childrens_Nonfiction/whoosh.html