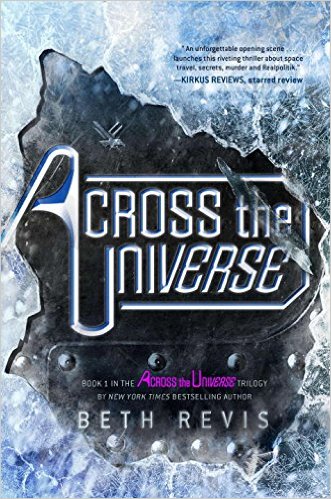 This is a science fiction dystopian story crossed with locked room mystery.

Across the Universe is told from two perspectives. First, we have Amy. As the book opens, she watches both her parents get cryogenically frozen to travel on a space ship for 300 years to terraform a new planet. Amy’s father tells her she doesn’t have to go through with it, but she decides to stay with them.

The other narrator is Elder, a sixteen-year-old who lives on the spaceship Godspeed, being trained to be the next leader. He’s frustrated because Eldest hasn’t been training him as he should be. He is destined to lead all the people on the ship – Shouldn’t he know more about it?

Elder finds out about the frozen people in the belly of the ship. Not long after, the beautiful girl with the amazing red hair wakes up. They are fifty years away from landing – who woke her early? How will she cope with life on Godspeed, which is not what she signed up for?

The story continues, seen from both Amy’s and Elder’s perspectives. Things that Elder thinks are normal, Amy sees as seriously flawed. Eldest tells them this is how things must be. Amy tries to explain what life was like on earth, but most of the people of Godspeed believe she’s crazy.

Then more of the frozen passengers thaw – and some die. Who is responsible? Are Amy’s parents’ lives in danger? What secrets are behind the strange life on the ship? And will Amy ever see the stars again? Does Elder have what it takes to lead his people? When should he speak up, and when is it best to simply obey Eldest? What does Eldest know about their mission that he is keeping hidden?

Eldest tells Elder that discord comes from differences. Amy is different. Will the discord she brings destroy the ship?

This is the first book of a trilogy. By waiting so long to read it (I meant to read it ever since it was first published), I will not have to wait to read the sequels! I’ll let you know what I think….

Find this review on Sonderbooks at: www.sonderbooks.com/Teens/across_the_universe.html

Source: This review is based on my own copy, which I got at an American Library Association conference.