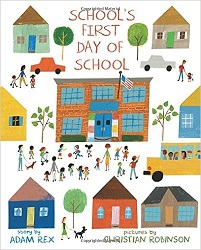 Okay, I wouldn’t have thought it possible, but here is a new twist on the First Day of School theme.

On the title page, you see construction workers and the school being built. Our story begins:

That summer, they dug up the big field, and poured the foundation, and set brick on top of brick until they’d built a school.

At first, the school doesn’t know what’s in store for it.

Most days a man named Janitor came to mop the school, and buff his floors, and wash his windows. “This is nice,” the school said to Janitor. “Just the two of us.”

“Won’t be just us for long,” said Janitor. “Soon the teachers will come, and then you’ll be filled with children.”

The school creaked. “Children?”
“All kinds of children. They’ll come to play games and to learn.”
“Oh,” said the school, “will you be here?”
“You’ll see me after the school day is over,” said Janitor. “Don’t worry – you’ll like the children.”
But the school thought that Janitor was probably wrong about that.

When the children come, there are more of them than the school could possibly have imagined. The school’s feelings are hurt, though, when some kids cry and don’t want to come in. And others say they hate school.

Later he squirted the puffy-haired kid in the face, then felt bad about it afterward.

(Now kids who get squirted by a drinking fountain may think about what they’ve said about their school!)

The school listens in on classroom lessons and is embarrassed when its fire alarm goes off. During lunch, a boy tells a funny joke, and another boy laughs so hard that milk comes out of his nose.

“Now I’m covered with nose milk,” thought the school. He had to admit that it was a pretty funny joke, though. Even the girl with freckles liked it.

This book is a perfect match for Christian Robinson’s childlike illustrations. It’s easy to talk about what anxieties a school might have as compared with anxieties a child might have.

I will go so far as to say that this lovely book is destined to be a classic for kids anticipating going to school. Maybe the school is anticipating their arrival, too!

Find this review on Sonderbooks at: www.sonderbooks.com/Picture_Books/schools_first_day_of_school.html