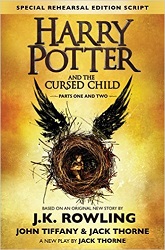 Harry Potter and the Cursed Child

based on an original new story by J. K. Rowling, John Tiffany, and Jack Thorne

A new play by Jack Thorne

It was lovely to be back in Harry Potter’s world. This play features best friends Albus Severus Potter and Scorpius Malfoy. I liked the look at their friendship and what the wizarding world is like twenty-two years later.

But I didn’t love the story. It’s all about Time Turners and changing history — and trying to fix what happened when that goes wrong. I don’t like time travel stories. It’s far too easy to mess up the internal logic. This story completely strained believability, even in the wizarding world.

Hermione’s Time Turner in Harry Potter and the Prisoner of Azkaban always brought you back one hour. The Time Turner in this story can go farther back, for only five minutes — but there’s no indication how you set the time you want to go back to.

I won’t even get started on my disagreements with what would happen because of a simple change. And the silliness of people in the original timeline waiting to see if their kids can fix a different timeline or if they would just wink out. Why wouldn’t the Time Turner just bring them back to when they left? (My son told me about the concept of San Dimas time — “San Dimas Time is used when a writer wants to add some against-the-clock tension to a Time Travel story in spite of how little sense that makes.”) After all, Hermione’s Time Turner would have been pointless if it hadn’t worked that way.

Besides that, sloppy Time Travel stories have the effect of making all the stories seem less significant. How do we know in ten more years someone else won’t go back in time to make sure Voldemort doesn’t lose? If the timeline is so fluid, what “really” happened?

Anyway, I probably shouldn’t belabor it. I have several objections to this particular plot. And the play format doesn’t read as nicely as the novel form.

But what I did like? I liked going back into Harry Potter’s world. I liked looking at what it would be like for the son of the famous Harry Potter if he got sorted into Slytherin and had as best friend the son of Draco Malfoy. I liked finding out that the sweet old Trolley Witch has an important job of keeping young wizards and witches on the Hogwarts Express and can get fearsome when crossed.

A small part of me felt like J. K. Rowling is still trying to vindicate herself for killing off Cedric Diggory. (See what would have happened if he hadn’t died!) But mostly this was a fun excursion into a beloved world. I’m looking forward to the Fantastic Beasts and Where to Find Them movie coming out this Fall. But I don’t think I’d want to read the script. Since I couldn’t go see this play in London — this was the next best thing, but I don’t think I’ll be buying a copy for my own extensive Harry Potter collection.

Find this review on Sonderbooks at: www.sonderbooks.com/Childrens_Fiction/hp_cursed_child.html