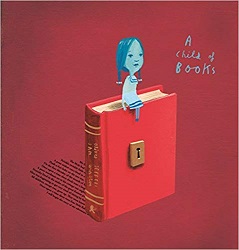 A Child of Books

by Oliver Jeffers and Sam Winston

Picture books that try to convey the magic of reading don’t often come close. This one, with powerful and imaginative text-based art gets across the feeling of the world that books create – and thus achieves success.

The main text is simple:

I am a child of books.

I come from a world of stories
and upon my imagination I float.

I have sailed across a sea of words
to ask if you will come away with me.

Then the girl (the child of books) and the boy she invites go off and have adventures, which include mountains of make-believe, treasure in the darkness, forests of fairy tales, and monsters in enchanted castles.

Our house is a home of invention
where anyone at all can come
for imagination is free.

I have to confess – my personal favorite page is the one with the words “Some people have forgotten where I live.” That page shows a man reading a newspaper. His glasses show the reflection of a bunch of numbers. But if you read the small print on the newspaper he’s reading, the articles are hilarious. The headlines include, “BUSINESS,” “IMPORTANT THINGS,” “SERIOUS STUFF,” and “THE FACTS.”

Here’s the first paragraph of the article on “THE FACTS”:

Scientists have discovered a new fact. In one test, nearly half the subjects proved the fact, it was revealed. The findings, which came from first watching people and then quizzing them, have attracted criticism from some other scientists.

Okay, that’s not enough! The final visible part of the article says this:

Their work began with several trials involving people who were shut in a small room and tested. After 6, 12, or 15 minutes, they were asked if they had discovered this fact. On average, their answers were near the middle of a nine-point scale.

(Excuse me while I laugh about that and the other Serious and Important articles.)

Where was I? Oh, part of what makes this book so special is that it uses the text of classic children’s books in the art. The “mountains of make-believe” are formed from tiny print of words taken from Peter Pan and Wendy. The initial invitation to leave to the world of books is given on a road paved with words from Alice’s Adventures in Wonderland. The sea of words that the child of books arrives on is made of text from Gulliver’s Travels, The Swiss Family Robinson, and The Adventures of Pinocchio.

In fact, looking more closely at the monster made of dark words that seem to come particularly from Dracula and Frankenstein, I see that his horns and nose are made of sinister phrases and his claws are the words “Abhorred,” “monster!” “Fiend,” “Wretched,” “creature,” and “devil!” The children escape the monster by climbing down a rope made of words from Rapunzel.

The Forest of Fairy Tales has trees whose trunks are the page end of books and whose branches are words from various fairy tales.

And the art is lovely throughout. Words, unfittingly, can’t do it justice. There is much use of photographed elements (like the books in the fairy tale forest) mixed with cartoon art mixed with well-placed words.

Usually when the main text of a picture book isn’t long (I count 122 words.), it seems good for a toddler audience. Not this one. This book will be treasured more by a child who has already experienced some of the magic of reading and who will enjoy reading the fine print and catching some of the references. In fact, such a child might be lured into discovering new treasures they haven’t encountered before.

Find this review on Sonderbooks at: www.sonderbooks.com/Picture_Books/child_of_books.html