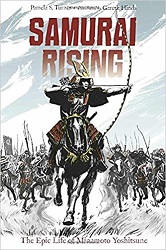 The Epic Life of Minamoto Yoshitsune

This book of narrative nonfiction for children booktalks itself. Samurai warriors! Murder and betrayal and kidnapping! Epic battles and clever strategy! And it’s all true!

Pamela S. Turner has done in-depth research about an ancient Japanese Samurai warrior, around whom many legends have sprung up. She does a good job separating what is known from what is speculated about him, and the final 73 pages of the book are back matter, including notes about the history and about her research, a timeline, bibliography, and an index.

The story itself reads like a gory and dramatic novel. Now I personally am not a big fan of war stories, but for kids who don’t mind that (and there are many), this book is filled with excitement – all the more exciting because it really happened.

The Introduction is short and explains why Minamoto Yoshitsune’s story is important:

Few warriors are as famous as the Japanese samurai. We remember those beautiful swords and those fearsome helmets. We recall, with both horror and fascination, how some chose to end their own lives. But no one can understand the samurai without knowing Minamoto Yoshitsune.

Yoshitsune’s story unfolds in the late twelfth century, during the adolescence of the samurai. Yes, cultures have their youth, maturity, and old age, just as people do. During Yoshitsune’s lifetime the samurai awakened. Their culture was bold, rebellious, and eager to flex its muscle. The samurai would ultimately destroy Japan’s old way of life and forge a new one using fire and steel and pain.

Yoshitsune was at the very heart of this samurai rising. Exile, runaway, fugitive, rebel, and hero, he became the most famous warrior in Japanese history. The reason is simple: Yoshitsune was the kind of man other samurai longed to be.

The book begins with the uprising and death of Yoshitsune’s father in 1160. It ends with Yoshitsune’s suicide before his enemies came for him in 1189. In between we hear the story of the warrior’s glory that went unappreciated except in legend.

The author does an amazing job of making this all accessible and understandable to the reader, while inserting little reminders that this is history, and we don’t know everything. She mentions eyewitness accounts, where the information is sketchy, and uses language like “probably” and “Imagine…” where she’s drawing inferences.

No child who reads this book will think that history is boring!

Find this review on Sonderbooks at: www.sonderbooks.com/Childrens_Nonfiction/samurai_rising.html