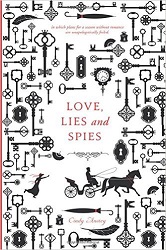 This book had me from the first paragraph, which is:

“Oh my, this is embarrassing,” Miss Juliana Telford said aloud. There was no reason to keep her thoughts to herself, as she was alone, completely alone. In fact, that was half of the problem. The other half was, of course, that she was hanging off the side of a cliff with the inability to climb either up or down and in dire need of rescue.

A page later, Juliana does hear someone approaching.

Please, she prayed, let it be a farmer or a tradesman, someone not of the gentry. No one who would feel obligated to report back to Grays Hill Park. No gentlemen, please.

“Hello?” she called out. Juliana craned her neck upward, trying to see beyond the roots and accumulated thatch at the cliff’s edge.

A head appeared. A rather handsome head. He had dark, almost black, hair and clear blue eyes and, if one were to notice such things at a time like this, a friendly, lopsided smile.

“Need some assistance?” the head asked with a hint of sarcasm and the tone of a . . .

“Are you a gentleman?” Juliana inquired politely.

The head looked startled, frowned slightly, and then raised an eyebrow before answering. “Yes, indeed I am –”

“Please, I do not wish to be rescued by a gentleman. Could you find a farmer or a shopkeep – anyone not of the gentry – and then do me the great favor of forgetting you saw me?”

“I beg your pardon?”

“I do not want to be rude, but this is a most embarrassing predicament –”

“I would probably use the word dangerous instead.”

“Yes, well, you would, being a man. But I, on the other hand, being a young woman doing her best not to call attention to herself and bring shame upon her family, would call it otherwise.”

Well, it soon becomes apparent (as the roots give way) that Juliana must settle for the help of this gentleman and his friend. However, it so happens that the gentlemen also don’t want their presence on the cliff generally known, so all parties agree to pretend to be unacquainted, should they encounter one another again.

You will not be surprised that they do encounter one another again.

Juliana is an 18-year-old young lady getting ready for her first Season in London with her cousin. But Juliana is determined that she is not looking for a husband. No, her time in London is a cover for an opportunity to find a publisher for the research she and her father have done on lady beetles. Juliana has no intention of getting married and forsaking her father to do his research without her.

Meanwhile, someone is passing messages to Napoleon, and the handsome gentleman of the cliffside is on their trail. That trail increasingly brings him in proximity with Juliana, since the noble family she’s staying with has some not very noble members.

This book is tremendous fun from start to finish. Juliana is capable, independent, and intelligent – yet somehow manages to get into multiple situations where she needs to be rescued. Those situations ended up being so delightful, I couldn’t hold them against her.

This is a Regency romance with a little spying thrown in. The clause on the cover puts it well: “In which plans for a season without romance are unapologetically foiled.”

Find this review on Sonderbooks at: www.sonderbooks.com/Teens/love_lies_and_spies.html