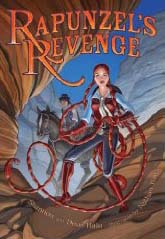 by Shannon and Dean Hale

I am a huge Shannon Hale fan.  So though I normally would not have rushed to buy a graphic novel, when I heard that she had written one with her husband (The artist, though having the same last name, is not related.), I simply had to buy it.

This wasn’t up there in the best-thing-I’ve-ever-read territory like her novels, but all the same, this book is completely delightful.  Though, come to think of it, it’s the best graphic novel I’ve ever read.  (Don’t tell my son!)

Rapunzel’s Revenge tells the tale of Rapunzel, set in the old West.  Rapunzel is no wimpy princess, waiting for a prince to set her free.  When she learns at twelve years old what “Mother Gothel” has done to her real mother, and how she terrorizes the countryside, Rapunzel confronts her.  She’s promptly placed in a tower made from a giant tree that Mother Gothel made with her growth magic.  The same magic begins to affect Rapunzel’s hair.

There are some fun things in the illustrations.  I love the three books Rapunzel has in the tower:  Girls Who Get Saved and the Princes Who Save Them, How to Make a Twig Bonnet, and There’s Always Bird Watching.

With nothing to do in the tower, she practices her lasso skills by using her ridiculously long hair, braided into rope.

Finally, after she turns sixteen, her hair is long enough for her to use it to escape her prison.  It’s after her escape that she sees a traveling adventurer who heard about the beautiful maiden in a tower.  She points him to the tower and tells him the maiden is slightly deaf, so he should be sure to yell as loud as he can.

On the way back to Gothel’s villa to rescue her mother, Rapunzel becomes a vigilante, helping people with her amazing lasso of hair.  She falls in with a rogue named Jack who’s been having some trouble with giants.  Rapunzel convinces Jack to help her rescue her mother and bring justice to the countryside, which has been sucked dry by Gothel’s magic.

Here’s a girl who doesn’t need saving!  This imaginative adventure has a heroine you can cheer for.