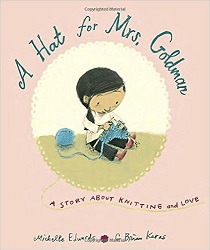 A Hat for Mrs. Goldman

A Story About Knitting and Love

Oh, here is a picture book for knitters to love!

Unlike many stories about knitting, it acknowledges that knitting is difficult and takes a long time. And this ends up being a beautiful story about showing love by knitting.

Mrs. Goldman knits hats for the whole neighborhood, including Sophia.

“Keeping keppies warm is our mitzvah,” says Mrs. Goldman, kissing the top of Sophia’s head. “This is your keppie, and a mitzvah is a good deed.

Sophia goes with Mrs. Goldman when she walks her dog Fifi, and Sophia notices that Mrs. Goldman doesn’t have a hat any more. She gave it to Mrs. Chen.

Sophia gets an idea.

Last year, Mrs. Goldman taught Sophia how to knit.
“I only like making pom-poms,” decided Sophia after a few days.
“Knitting is hard. And it takes too long.”

Now Sophia digs out the knitting bag Mrs. Goldman gave her. And the hat they started.
The stitches are straight and even. The soft wool smells like Mrs. Goldman’s chicken soup.

Sophia holds the needles and tries to remember what to do. She drops one stitch. She drops another.

Still Sophia knits on. She wants to make Mrs. Goldman the most special hat in the world.

Sophia works hard on that hat. For a long time. Finally she finishes knitting and sews it up.

I love that the hat doesn’t look very good. In fact, it looks like a monster hat.

But Sophia’s solution is wonderful, and fits with what went before. She covers the hat with red pom-poms. When she gives it to Mrs. Goldman, she says it reminds her of Mr. Goldman’s rosebushes.

And now her keppie is toasty warm. And that’s a mitzvah.

The book finishes up with instructions for knitting a simple hat and for making pom-poms.

(Hmmm. Now as I post this, I think it’s pretty much a Pussy hat. But you can cover it with pom-poms if you like. Or not.)

This is a beautiful story, as it says, about knitting and love.

Find this review on Sonderbooks at: www.sonderbooks.com/Picture_Books/hat_for_mrs_goldman.html