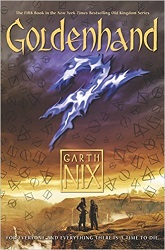 This is now the fifth novel set in the Old Kingdom, not counting a novella and short story. The events of this book happen just as the title story of Across the Wall finishes.

You don’t necessarily need to read the prequel, Clariel, before you read this one. But reading the other books would be helpful, so you have a feel for how Charter Magic works. And Clariel gives you background about the Witch With No Face, who is behind the scenes in this book. It had been years since I read the earlier books, so I didn’t remember details, but I didn’t have any trouble following this story.

The title refers to Lirael herself. Right at the beginning, we learn how she got the name:

Lirael hurried up the steps to the mews. She flexed her replacement hand as she did so, marveling at how well it worked. When her own hand had been bitten off by the Disreputable Dog almost seven months before in order to save her life from the ravening power of Orannis, Sameth had promised to make her a replacement. He had lived up to that promise, and shown he was indeed a true inheritor of the Wallmakers’ engineering ingenuity and magical craft, though it had taken him a long time to get it right, with much tinkering and adjustment. It was only in the last few days that it felt entirely normal to Lirael, really just like her own flesh-and-blood hand.

It was mostly made from meteoric steel, but Sam had gilded the metal, and unasked had added an extra layer of Charter spells atop the ones that made the hand work and even feel like flesh, so it also glowed faintly with a golden light.

Already, many people were calling her Lirael Goldenhand.

Sabriel and Touchstone are taking a vacation while things are apparently quiet. This leaves Lirael in charge when a dangerous free magic creature emerges across the wall. The message comes from Nicholas Sayre.

Lirael deals with the creature and tries to heal Nick, but he’s got a strange combination of free magic and charter magic inside him (from what happened in Abhorsen). She decides she needs to take him to the Clayr. Perhaps they have a book in the Great Library that will help figure out his case.

Meanwhile, north of the kingdom, a girl of the Athask tribe named Ferin is trying to bring a message to Lirael. A message left from Lirael’s mother before she died. But all the other tribes are sending their sorcerers to stop her. When Ferin is turned away at the bridge, she takes a boat, but after some fisher folk save her, they are all in danger.

For most of the book, chapters alternate between Lirael and Ferin. Lirael travels with Nick to the Clayr, and Ferin is desperately traveling over water and over mountains to get into the Old Kingdom. When Ferin does finally deliver her message, an even more daunting danger faces the Old Kingdom.

This book had me enthralled from the start. Even though the story is complete in itself, it will be especially beloved by people who already know Lirael and care about her. In this book we’re rooting for her as she faces responsibility as the Abhorsen-in-Waiting, dealing with several crises as well as facing her family at the Clayr glacier and the Great Library.

Garth Nix’s world-building is flawless. The map’s been expanded and we learn about the northern tribes. His descriptions of the way free magic and charter magic work still sound plausible and consistent and true. You’re never drawn out of the story by hand-wavy descriptions.

When I started the book, Ferin’s desperate run from free magic sorcerers manipulating the Dead to chase her were so scary, I woke up one morning from a dream about it. (It was combined with drones from Railhead, which I’d finished before starting Goldenhand. Fortunately, I woke up before I got too scared.)

Yet another wonderful and captivating story of the Old Kingdom and the Abhorsens who travel in Death to fight evil, using a necromancer’s bells.

Find this review on Sonderbooks at: www.sonderbooks.com/Teens/goldenhand.html