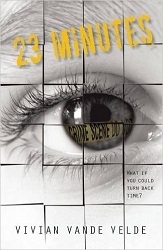 I loved this book. Yes, there’s an unlikely assumption at the beginning, but since it’s the set-up and they never tried to explain it, it’s very fun to think about what you would do in that scenario.

15-year-old Zoe has the ability to turn back time for 23 minutes. She doesn’t know why she has this ability or how it works, but she’s figured out what she can do. She has to put her arms around herself, without touching anyone else, and say out loud “Playback,” and she will be put back to 23 minutes earlier.

Once she has done this, she can keep redoing those 23 minutes, keep resetting to the same time – for ten tries. But if she once lets 24 minutes go by, or if she uses up her ten tries, she’s done and can’t go back.

Zoe has found that 90% of the time, trying to redo things makes them worse.

But the book starts with a situation Zoe has to try to change. She gets caught in a downpour and goes into a bank to get out of the rain. The people in the bank look at her askance because of her blue hair and the way she’s dressed. One youngish man, though, is kind to her.

But then a bank robber starts holding up the bank, and he ends up shooting the kind man in the face. Zoe has to try to fix this.

Her first try, she borrows a cell phone from someone on the street and calls the police. (Teens who live in a group home aren’t allowed to have their own cell phones.) A lot more people end up getting shot that time.

Next she tries warning the bank guard. That doesn’t go well, either. Eventually she figures out she needs to get the kind man’s help. But what can she say to win his confidence?

This book reminded me of the movie Ground Hog Day, except that Zoe knows the number of iterations is limited. I like the way she learns things in one iteration to use in the next.

The book is dedicated “to those who try to make things better for at-risk children and teens,” and Zoe is indeed one of those teens. I like the way the book shows her trying to do what’s right, despite the reactions of people around her. I also like the way the kind man’s character is revealed to be consistently kind, even though different things happen in each go-round, and he’s tested in different ways.

Of course, totally apart from the wonderful story, it’s fun to speculate what you would do if you had that power. What moments would you be able to fix? It’s easy to understand Zoe’s perspective that it’s usually not, actually, a good idea.

She found out about her ability when she was thirteen. That was when she learned the rules. Here’s why she was somewhat slow about changing things when the bank robbery started:

But she has not had good luck with this sort of thing in the past. She spent way too long on it at thirteen – she thinks she may have spent years playing back various moments when she was thirteen, trying to fix things, despite the fact that, really, nobody can fix being thirteen.

In the two and a half years she’s had this ability, playback has cost her more than it’s gained, and Zoe has come to think of her life as being like one of those choose-your-own-adventure books – one where it’s best to read through once and settle, because the choices only go from bad to worse.

Most of all, this is a thrilling, dramatic story with a life-or-death puzzle to solve and characters you come to love.

Find this review on Sonderbooks at: www.sonderbooks.com/Teens/23_minutes.html

Source: This review is based on my own copy, sent to me by the publisher.